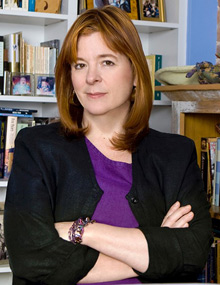 You can win 2 free tickets to the reception and dinner by making a donation to WomenArts this week.  If you donate $20 or more to Womenarts,  you will be entered into a drawing for a pair of tickets to the reception and dinner – a $600 value!  Donations must be received by midnight on Saturday, April 4. The winner will be notified on Sunday, April 5.  Make your donation now>>

You will be able to meet Theresa Rebeck at the reception from 6 – 7:30 p.m. The reception will also include a silent auction and live enterntainment. During the sit-down dinner from 7:30 – 9:30, Rebeck will be interviewed by Bay Area director/filmmaker, Amy Glazer.

Theresa Rebeck won the Laura Pels Foundation award for mid-career playwrights in 2010. At the awards ceremony she made a passionate keynote address about how her career has been hampered because she is a woman and ended with a rousing call to the theatre community to address gender issues.  She said:

“I really do believe that if enough people stand up and say this cannot go on, then it will not go on. . . It’s time to hear both sides, to hear all voices, to build a culture where stories are told by both men and women.  That is the way the planet is going to survive, and it’s the way we are going to survive.”

You can purchase full-price tickets to the Gala for $300 from PlayGround. PlayGround is also offering discount tickets to the reception only for $50.  If you purchase a subscription to PlayGround’s 7-play Monday Night series ($70 regular/$56 student) by April 3, you will be eligible to purchase a Gala ticket for $150.

Some of the best actors in the Bay Area perform in the Monday Night series because it is so much fun for them to work with scripts in this early stage of development.  There is a real sense of a theatre community working together to bring the scripts to life at every Monday Night performance.  PlayGround has a firm commitment to gender parity in all of its work, and so at least half the plays presented every month are written by women, and half are directed by women.  The ten-minute plays that were presented at SWAN Day Bay Area 2015 were originally developed for WomenArts Night at PlayGround that was held on March 16, 2015.