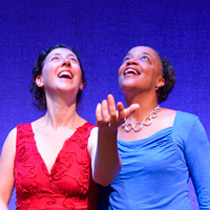 Admission is free, but only a few seats are left.
Reserve your seats now through Brown Paper Tickets!
PLEASE NOTE:  Reservations will be held until 10 minutes before the show.  If we sell out online, we will set up a waiting list at the door and release unclaimed reservations on a first-come, first-served basis.

Martha Richards is celebrating her 20th year as Executive Director of WomenArts.  In 2008 Richards and film critic Jan Lisa Huttner created Support Women Artists Now Day/SWAN Day. In the first seven years of this new holiday, there have been over 1,200 SWAN events in 24 countries.  This year, there will be events all over the U.S, and in Burundi, Bulgaria, Canada, Czech Republic, Finland, Kenya, Nigeria, Tanzania, Turkey, and New Zealand!  Richards will speak about the remarkable growth of SWAN Day and the increasing interest in gender parity in the arts in the U.S. and elsewhere.

The Bay Area has an incredible wealth of talented women artists.  To showcase a few of them at SWAN Day Bay Area, WomenArts will present four ten-minute plays developed in collaboration with PlayGround and Symmetry Theatre.

Valerie Weak has been collecting statistics on women actors, directors, and playwrights at Bay Area theatres for the past three years through her Counting Actors Project.  She now has over 500 plays in her database.  She will release the summary of her findings for the first time at SWAN Day Bay Area.

Following the show, audience members will be invited to stay for a free wine and cheese reception where people can network and continue the conversation about the best ways to advance women artists in theatre.

If you are in the Bay Area and want to celebrate SWAN Day all day on March 28, it is easy this year.  You could spend the morning at SWAN Day Martinez, an outdoor visual and performing arts fair held  at the Old Train Depot parking lot in Martinez, then come to WomenArts’ free SWAN Day Bay Area at Ashby Stage in Berkeley from 3 p.m. – 5 p.m.

In the evening, you could return to Ashby Stage at 8 p.m. to see  Anne Carson’s Antigonick, the first play of Shotgun Players’ all-women playwrights’ season, or head over to the East Side Arts Alliance, 2277 International Boulevard in Oakland for a 7 p.m. reading of Out of Control, a new play by Opal Palmer Adisa presented by the Lower Bottom Playas.