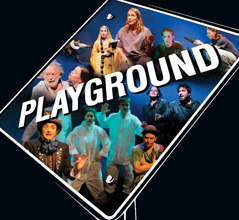 The 48 playwrights in PlayGround’s development program have been given four and a half days to write ten-minute plays on the topic, Herstory: The Greatest Stories Never Told.  Martha Richards and Christine Young of WomenArts will review the scripts with the PlayGround Artistic Director Jim Kleinmann and others this week, and then the top six plays will be rehearsed with professional actors and directors for one-and-a-half hours each and presented as script-in-hand staged readings at WomenArts Night as part of the monthly series Monday Night PlayGround.  The ten-minute play format gives the playwrights a wonderful opportunity to try out new ideas with skilled actors and directors, and it is fun for audience members to see these new plays in their earliest stage of development.

WomenArts approached PlayGround because of the company’s long-standing commitment to gender parity, both on and off stage.  Half of PlayGround’s company of writers, actors and directors are women, and PlayGround has been recognized by the International Centre for Women Playwrights with a 50/50 Applause Award for its leadership in producing plays by women.  In 2014, women were 50% of the writers selected for PlayGround’s season while women were only 26% of the writers produced by all Bay Area theatres.

In the 21 years since its founding in 1994, PlayGround has supported more than 200 local playwrights and staged over 700 original short plays and 54 new full-length plays, with 3 more commissions currently in development. Playwright applications are accepted in the summer. For more information, visit PlayGround’s website at:  http://playground-sf.org

The three plays written by women for WomenArts Night will be repeated on Saturday, March 28 at 3 p.m. at Ashby Stage, 1901 Ashby Avenue, Berkeley, CA, as part of SWAN Day Bay Area presented by WomenArts in collaboration with PlayGround, Symmetry Theatre, and the Counting Actors Project.