The idea for SWAN Day grew out of a conversation between two feminist arts activists – Martha Richards, the Founder and President of WomenArts, and Jan Lisa Huttner, the Editor-in-Chief of FF2 Media and the creative force behind WITASWAN (Women in the Audience Supporting Women Artists Now).

Richards was inspired by Eve Ensler’s V-Day, and she had been trying to figure out how to create a similar galvanizing event that would raise the visibility of women artists. She wanted to give artists a grassroots way to raise funds for their projects in the same way that V-Day events were raising funds for organizations addressing violence against women.

Meanwhile, Jan Lisa Huttner had been working to encourage women to attend more films written and directed by women, and she had started WITASWAN (Women in the Audiences Supporting Women Artists Now).  WITASWAN members made a commitment to see at least one film directed or written by a woman every month.  WITASWAN began as an initiative of the Illinois chapter of the American Association of University Women.  The complete history of WITASWAN is at www.films42.com/witaswan.asp. 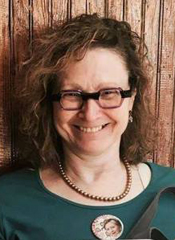 In April 2007, Jan Lisa Huttner invited Martha Richards to speak at an American Association of University Women conference in Bloomington, IL.  (For pictures of this historic meeting see www.films42.com/witaswan/martha-richards.asp).

The idea for SWAN Day was born during the car ride between Bloomington and Chicago, as Huttner and Richards discussed ways to build more direct connections between women artists and women audience members.  In the car and over a shared pizza dinner, they came up with the idea of Support Women Artists Now Day, an annual event that would link women artists and women audience members.

A few months later, they agreed that SWAN Day should be on the last Saturday of March, Women’s History Month, and Richards set to work to build a section of the WomenArts website to promote SWAN Day as a new international holiday.

In December 2007, Richards and Huttner both sent out press releases, and Richards sent a series of announcements about SWAN Day to the WomenArts mailing list of approximately 10,000 people world-wide.  She invited everyone to join in creating a new annual international holiday to celebrate women artists.  The announcements captured the imaginations of women artists around the world, and she immediately started receiving letters from artists who wanted to participate.

To help artists organize their SWAN Day events, Richards developed a variety of free tools which she published on the WomenArts website including fundraising and publicity advice, downloadable logos and posters, and sample fundraising letters, press releases, mayor’s proclamations, letters to the editor, and press releases. She also created an online SWAN Calendar so that everyone could create free listings of their events.

There were approximately 150 events in a dozen countries that first year, and thousands of women artists around the world have created SWAN events over the years.  Jan Lisa Huttner has organized film events featuring prominent women film directors for SWAN Day every year – first in Chicago and then in New York.  She has continued to write extensively about women in film.

Martha Richards oversaw all the fundraising, publicity, artist liaisons, and website maintenance for SWAN Day for 11 years from its inception in 2007 through SWAN Day 2018.  She organized SWAN events in New York City in collaboration with the League of Professional Theatre Women, New York Women in Film and Television, and the Coalition of Women in the Arts and Media.  She helped produce Paula Kimper’s opera about Sojourner Truth as part of SWAN Day 2012 and she produced Mary Watkins’ opera, Dark River: The Fannie Lou Hamer Story in 2014. She also obtained SWAN video endorsements from Sandra Oh, Isabel Allende, and Famke Janssen.  Please visit our SWAN Day Videos page to see more videos.

WomenArts ran the program from 2008 through June 2018. WomenArts collaborated on SWAN Day 2018 with StateraArts, and StateraArts led the program (with support from WomenArts) during 2019 and 2020.

We honor all of the people who have organized and participated in SWAN events over the years, and we hope that the idea of SWAN Day will continue to resonate with women artists around the world for many years to come.