Are you looking for a New Year’s resolution that will help women artists and be a lot of fun? Would you be willing to see one film or play by a woman every week this year and Tweet about it?  If so, be sure to check out the two inspiring initiatives described below,  #52FilmsByWomen and #52PlaysByWomen.

52 Films By Women
#52FilmsByWomen was launched in October 2015 by Women in Film Los Angeles.  The concept was simple, they asked people to make an online pledge to watch a film a week by a woman for a full year (52 films), and then post the names of the films on Twitter with the hashtag #52FilmsbyWomen.  Over 10,000 people took the pledge in the first year!

52 Plays By Women
Inspired by Women in Film’s success, a group of women in theatre have started #52PlaysByWomen. Once again, the rules are easy.  Simply see or read a play by a woman or woman-identified playwright once a week for a year and announce the play and playwright on Twitter each week with the hashtag #52PlaysByWomen. 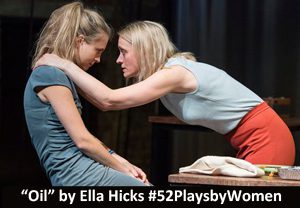 The play can be any length.  Readings and workshops of women’s plays count.  You can read more about the guidelines here.  You can follow 52PlaysByWomen on Twitter or search for their hashtag to see what other people are watching and reading.

The goals of these two initiatives are to increase the visibility of women in film and theatre on social media and to get audience members into the habit of seeing and supporting work by women. Both of them are purely voluntary and operate on the honor system. If you can’t see a film or play every single week, you can still participate by using the hashtags to publicize whatever works by women you manage to see.

Finding 52 Films by Women:  Film Fatales has compiled a list of 245 films by women that are available on Netflix.  Also, there are lists that have been compiled by Women in Film’s Senior Director of Education Gayle Nachlis, and their Communications Coordinator Morgan Green. You can also follow Women in Film Los Angeles  on Facebook and Twitter to find more lists and ways to watch films by women.

Jan Lisa Huttner, the co-founder of Support Women Artists Now Day/SWAN Day and founder of WITASWAN  (Women in the Audience Supporting Women Artists Now), has over a hundred of reviews of films written or directed by women on her website, The Hot Pink Pen. She has also published a book of film reviews, Penny’s Picks: 50 Movies by Women Filmmakers.  You can find her latest reviews on the Film Reviews page on the WomenArts website.

WomenArts also maintains a page of Websites about Women in Film , which has links to websites where you can rent or purchase films by women and websites with specific information about films by African-American women, Asian women, women over 40, lesbians, and experimental women filmmakers.

Finding 52 Plays by Women: Since only about 20% of the plays produced in most towns are by women writers, it may be hard to attend one production per week of a play by a woman, but there are plenty of women’s plays to read.

If you are looking for contemporary plays, the Kilroys have published an annual list of the best unproduced plays by women for the past three years.  The Kilroys are a group of women playwrights and producers based in Los Angeles.  Many of the plays on their list are available on the New Play Exchange for easy access.

If you’re looking for some classic plays by women to read, Laura Shamas has compiled a list of 53 classic plays that you can read online for free – 20 from the 20th century and 33 from earlier periods. There are some wonderful older plays on her list that would be a lot of fun to read out loud with your friends.

Special Thanks:  Special thanks to Laura Shamas for telling us about these initiatives and writing part of this post.

CAN’T DO ONCE A WEEK?  HOW ABOUT ONCE A MONTH?

There are a number of other initiatives around the country that encourage people to see films or plays written or directed by women – often with monthly gatherings.  We have listed a few of our favorites below.  If you know of others, please tell us about them, and we will post them on our Facebook page.

WITASWAN Monthly Film Groups – Back in 2004 Jan Lisa Huttner, the co-founder of Support Women Artists Now Day/SWAN Day, created WITASWAN  (Women in the Audience Supporting Women Artists Now), a grassroots movement of people who took a pledge to see films written or directed by women once a month. Many people have attended films or watched videos by women on a monthly basis in WITASWAN groups.  Please feel free to start a chapter of your own with your friends.

Parity Productions (Formerly Works by Women) – New York’s Parity Productions is a non-profit organization that develops new, original plays by women and transgender artists, and promotes the work of other theatres that do the same.  They maintain a list of current New York productions where at least 50% of the artists are women or transgender.