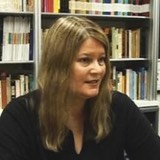 Thanks so much to our colleague and friend, Laura Shamas, for this special in-depth report on the plays she saw at the Women’s Voices Theater Festival last week.  For more information about Laura Shamas, please visit her website at:  www.LauraShamas.com.

The travel gods smiled on me this fall, and I’ve been able to catch several new plays that are part of the historic Women’s Voices Theater Festival, currently running in our nation’s capital. The Festival’s mission, according to their website, is one that I support: “To highlight the scope of new plays being written by women, and the range of professional theater being produced in the nation’s capital,” as part of “the largest collaboration of theater companies working simultaneously to produce original works by female writers in history.” 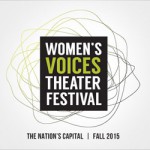 About fifty-two world premieres of female-authored plays and musicals are being produced by 48 Washington, D.C. area theaters, a mix of large and small companies (Equity and non-Equity); the launch party was on September 8, and the last show closes on Nov. 22, 2015.

With a budget of over $500,000, co-produced by Nan Barnett (Executive Director of the New Play Network) and Jojo Ruf (Managing Director of the Laboratory for Global Performance and Politics at Georgetown University and Executive & Creative Director of The Welders), the Festival was initiated two years ago by seven D.C. area theaters:  Arena Stage, Ford’s Theatre, Round House Theatre, the Shakespeare Theatre Company, Studio Theatre and Woolly Mammoth Theatre Company. (See a video of the artistic directors of these companies.) The festival is designed both to boost to women playwrights and to draw attention to the scope of D.C. theaters – a win/win.

I am unable to see even 1/10th of the shows being offered, so I don’t consider myself an expert about the Festival in any way – just a lucky pop-in attendee. Here are some of my informal impressions, with quotes from some of the amazing artists involved in the Festival. 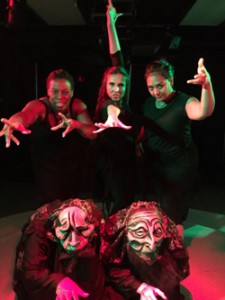 The first Festival play I saw was Witches Vanish by Claudia Barnett, directed by Deborah Randall at Venus Theatre. This play features The Weird Sisters from Shakespeare’s Macbeth as a metaphoric theatrical entity who witness  (or sometimes cause?) women to vanish in real life and in literature. As playwright, Barnett asks: “Why do women vanish?” With elements of puppetry, dance and fascinating vignettes, Barnett’s script interweaves scenes about “lost” women. It runs 90 minutes without an intermission. I admired the all-female cast.

Claudia Barnett spoke to me about her experience of the festival:  “The sense of community was amazing, even for an out-of-town playwright who was only in Maryland for four days. One reason was Lorraine Treanor, who introduced the playwrights to each other with her series of interviews on the DC Theatre Scene website.  Another reason was the American Theatre photo shoot, where many of us met. I remember the moment when we were all nervously posed together and we were told this shot would be the cover of the October issue of American Theatre. First I felt shock, then acceptance, then delight. It’s a tremendous honor to be part of that group.”

The next play I saw was Chimerica by British playwright Lucy Kirkwood. Although it was not an official part of the Festival, it was scheduled to coincide with the Festival for its U.S. premiere.

The title refers to the domination of the U.S. and China in modern geopolitics, covering a span of twenty years.  A photographer’s iconic photo taken in Tiananmen Square becomes a catalyst for a mystery that spans generations and cultures. The two-act play, masterfully directed by David Muse at the Studio Theatre, is ambitious, powerful and quite moving.  Kirkwood’s approach was cinematic in style and epic in scope, and I find myself still reflecting about her characters and images more than a month after seeing it. (Read more about Studio Theatre’s production of Chimerica.) 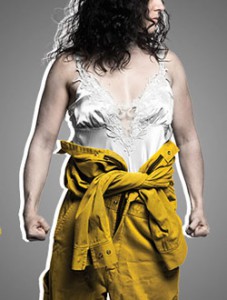 Ironbound by Martyna Majok, directed by Daniella Topol, at Round House Theatre was the next show I caught in the Festival. Majok, who was born in Poland, is an award-winning playwright on the rise (New Play Network Smith Prize, David Calicchio Emerging American Playwright Prize, 2015-2016 Playwrights of NY Award, among others).

Majok was inspired to tell the story of Darja, a Polish immigrant who works as a caretaker and factory-laborer, because “poor women” are not represented in our theatres.  In a video interview, Majok comments: “I wanted to see my own story on stage.”

With a cast of four, Ironbound is a 90-minute tour-de-force that takes place mostly at an urban bus stop.  A huge “X” image in the industrial set by James Kronzer marks the spot; and the protagonist Darja (beautifully played by Alexandra Henrikson) holds the stage the entire show.  We learn in real time and flashbacks about the key points of her life and relationships in the U.S., from 1992 – 2006. Without giving too much of the plot away, It’s ultimately about the bond between mother and son, and the meaning of love.

Ironbound will open next in New York in March 2016, co-produced by The Women’s Project and Rattlestick Playwrights Theatre, again directed by talented Topol. 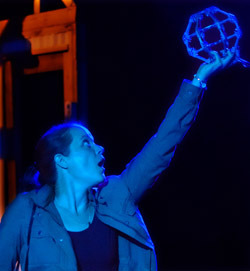 Liz Maestri’s Inheritance Canyon, directed by Lise Bruneau, produced by Taffety Punk Theatre Company was the next play I saw.

Inheritance Canyon is a zany and thought-provoking look at a scientific experiment and the meaning of life. It takes place in a canyon near a desert, and involves three friends: Shell (Esther Williamson), Sal (Teresa Castracane) and Gary (James Flanagan). They witness a mysterious explosion, and then are put under medical surveillance, a sort of limbo-quarantine, for the rest of the play. The play, in two acts, runs about two hours, with an intermission.

And speaking of intermission, the character switch that happens between the first act Shell and the other Shell (Gwen Gastorf) was theatrically fun at the top of the second act.  One of the meta-themes in Maestri’s play was “performance” in modern life: if we “perform” a function, does that mean we become it, Maestri wonders?

Maestri shared these thoughts with me about the Festival: “I’m still processing it all–the past few months have been such a whirlwind of new experiences, hard work, and straight-talk about the industry’s commitment to parity. The Festival is churning things up, causing trouble, changing lives, starting conversations, and catapulting new art into the world. I’m proud to be part of it.”

QUEENS GIRL IN THE WORLD by Caleen Sinnette Jennings 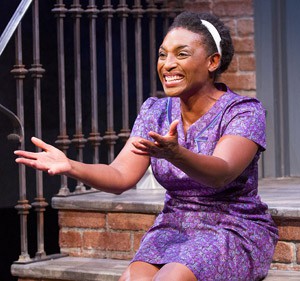 Caleen Sinnette Jennings’ one-person play, Queens Girl in the World, directed by Eleanor Holdridge and produced by Theater J, is the last show that I saw.

The virtuoso performer Dawn Ursula plays every character in the piece.  Queens Girls in the World depicts in two acts, what it was like for a studious and bright African-American girl to grow up in the Civil Rights era, and to live through its violent days.  By the end of the play, Jackie’s parents are so fed up with life in America that they move to Nigeria. The beautiful star-field projected at the end of the show, as they sail away, serves to highlight Jackie’s poignant continuing search for her identity. Everything about the production is top-notch, and the super-talented Dawn Ursula is unforgettable.

WOMEN DIRECTORS AT THE FESTIVAL

One thing I’ve been tracking is the number of excellent female directors working in the Festival. I asked Eleanor Holdridge, the head of the MFA Directing Program at Catholic University, about this: “It’s a thrilling bi-product of the festival that so many women directors are being brought along for the ride. For my female directing and playwriting students, I find the season a wonderful inspiration for what enriching strength that women theatre artists can bring to the art form in America.”

I tweeted an inquiry several days ago to ask if the D.C. Women’s Voices Theater Festival might become an annual event. They responded: “Great question. At this point it’s still too soon to say. We’ll keep you posted on any updates.”

In Holly L. Derr’s recent Howl Round post about the Festival, Nan Barnett mentions plans for a post-Festival handbook that could be used as a guide by other cities to mount their own versions of this kind of festival. Yes, please!

Martha Richards, Founder and Executive Director of WomenArts, attended the first industry weekend in the Women’s Voices Festival, and was part of a Gender Parity panel on October 4 at Woolly Mammoth Theatre. Richards pointed out: “Gender parity activists have been looking for ways to reach our goal of 50/50 by 2020, and large-scale festivals like this provide a perfect mechanism to push our numbers up quickly.  I predict that the Washington role model will inspire theatre women all over the world to create similar festivals.”

(Note: Other versions of this post have been published on the Los Angeles Female Playwrights Initiative website and in the International Centre for Women Playwrights October 2015 Newsletter.)

Something is Afoot in Washington, D.C. by Holly L. Derr –
http://howlround.com/something-is-afoot-in-washington-dc