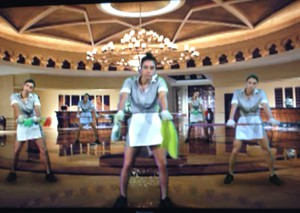 The Pori Art Museum in Finland is hosting Nietzsche Was A Man, an exhibition of video art by 20 Iranian women.  The exhibit includes works representing three generations of women currently living in seven countries.

The videos explore the intersections of all forms of inequality, such as sexism, racism, and speciesism.  Each artist reveals a unique perspective on issues such as gender communication, prejudice, shifting identities, violence, war, and the relationship between humans, non-human animals, nature, and the environment.  Evocative  images from the exhibit are available on Flickr.

The videos in this exhibition are grouped under six thematic headings: Nature, Self, Walls, Defiance, Violence, and Displacement.   According to the curators, Alysse Stepanian (USA) and Neda Darzi  (Iran), “The exhibit is not about Nietzsche, nationalities, race, religion, or politics . . .  The title of the show points to the prevalent dualistic patriarchal worldview that subordinates and exploits nature and the powerless, separates men from women, and humans from ‘animals.’ ”

The exhibit will be on display through May 24, 2015 at the Pori Art Museum in Pori, Finland.   The exhibition has been seen previously at the Malmö Konsthall in Sweden (2014), Museo Ex Teresa Arte Actual in Mexico City (2013) and FONLAD Digital Art Festival in Portugal (2013).

Co-curator Alysse Stepanian has lectured about interconnected oppressions during the exhibitions at each venue. Her lecture notes are included in a catalog published by the Pori Art Museum, and a vegan “Nietzsche Sandwich” has been added to the museum café menu on the occasion of this exhibition.