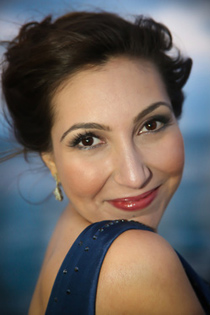 Golden Thread Productions will honor over a century of activism by Middle Eastern women artists on Thursday, March 12 at 8 p.m. at its annual International Women’s Day celebration, What Do the Women Say?

Presented at La Peña Cultural Center in Berkeley, California, the evening will feature original music as well as readings of early 20th century and contemporary poetry and prose.

The program will include the Bay Area debut of award-winning Syrian-American opera singer Saousan Jarjour, who will sing excerpts from a new opera by composer Julia Adolphe with a libretto by Iranian-born writer Nahal Navidar, as well as Syrian folk songs.  Jarjour has sung both classical and contemporary roles and has won a variety of competitions. Nahal Navidar wrote her first play as an emotional response to living in a post 9/11 world.  Her writing explores issues of identity of under-represented voices and women’s strength, often using magical realism to evoke the poetic core of emotions.

There will also be readings of early 20th-century writings by women from Iraq, Tunisia, and Algeria selected from Opening the Gates, A Century of Arab Feminist Writing, an anthology that features stories and essays from as early as 1867 that shatter the stereotypes of Middle Eastern women as submissive and silent. Published in 1990, the collection brings together many women’s voices including, Etel Adnan, Mary Ziyada, Nawal Al Saadawi, Huda Shaarawi, as well as authors never before translated into English.

The early 20th century readings will be presented alongside readings in English and Persian by leading Bay Area poets and authors: Elmaz Abinader (This House, My Bones), Anita Amirrezvani (The Blood of Flowers, Equal to the Sun), Najia Karim, and Deema Shehabi (Thirteen Departures From the Moon).  Golden Thread artistic associate Haleh Hatami will facilitate a conversation with the artists following the presentations.

What Do the Women Say? will be presented on Thursday, March 12 at 8 p.m. at La Peña Cultural Center, 3105 Shattuck Avenue in Berkeley, tickets for the event are $12 in advance or $15 at the door.  Click here to buy your tickets online.