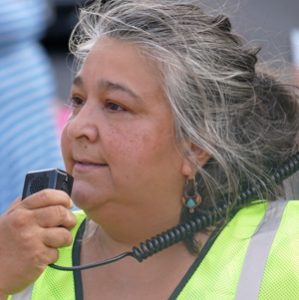 Elizabeth Vega is an “artivist” – an artist and activist who understands that art is its own form of powerful resistance. She has dedicated her life to harnessing that power and teaching others how to do the same. Based in St. Louis, Missouri, she works constantly on projects that combine art and activism both locally and nationally.  For this Valentine’s Day weekend (February 14-18, 2019), Vega and other organizers are urging artists to participate in Revolutionary Love, a national weekend of resistance in support of migrants who are being held in detention centers around the country.

A mother and grandmother with a Masters in Counselling, Elizabeth Vega founded Art House, in 2015. Located in an area of St. Louis, Missouri with high poverty and murder rates, Art House provides necessary resources for residents including mental health support, political education, and a food share program serving over 100 families eight times per month. In addition to these services, the collective engages in a variety of art activities to inspire imagination and develop communication skills with neighborhood children.

This past Christmas, Vega and a group of organizers from across the country joined forces on Tornillo: The Occupation to protest the youth detention camp located in Tornillo, Texas.  The tent-city camp was supposed to be closed in 2018 because of health and safety concerns, but according to the organizers, it was still holding  3,000 children between the ages of 13 and 17 in December 2018. As a result of the occupation and pressure from the local community and outraged citizens around the country, the center was closed in mid-January 2019.

When Vega and her fellow organizers and protestors, many of whom were meeting face-to-face for the first time, arrived in Tornillo on December 23, 2018, they were called to action before they even had time to set up camp. Hours earlier, the government had dumped hundreds of immigrants being released from detention at a local bus station with no resources. The artivists immediately helped start and run an emergency shelter at a local hotel, filling up grocery carts at Walmart at 2:00 am with basic supplies like diapers and Tylenol for the immigrants – many of whom were mothers with small children – who had no money and nowhere to go. 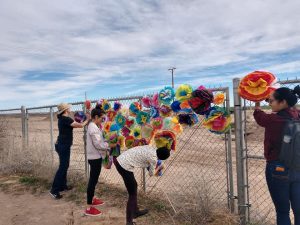 Over the course of the next week and a half, from December 23-January 3, while they continued to help run the makeshift shelter, the organizers set up a camp and occupied the space outside the Tornillo detention center. They made art, they screen-printed t-shirts, and they built relationships. A drummer from Albuquerque connected with a puppet maker from Santa Fe; people from Ferguson, El Paso, Dallas, and The Red Nation joined forces.

In their camp, they displayed paper flowers that had been sent from all over the country and hand-crafted more, trying to assemble 3,000 – one flower to represent each child being held at Tornillo. Vega says, “Those colorful flowers against that chain-link fence and the desert sky showed the beauty of what we’re fighting for, instead of what we’re fighting against.”

They also constructed an altar with a Christmas tree made out of water bottles, in honor of Jakelin Caal, the 7-year-old Guatemalan girl who died in U.S. Border Patrol custody on December 1, 2018.  On New Year’s Eve they blockaded the entrance to the facility with water bottles illuminated by Christmas lights. The bottles were symbolic of so many pressing American water crises, from Flint, Michigan to the Dakota Access Pipeline to the water bottles left in the desert for migrants which are slashed by the border patrol.  Because of the blockade, 22 buses bringing in workers for their shift change had to turn around.  “It was epic,” says Vega. 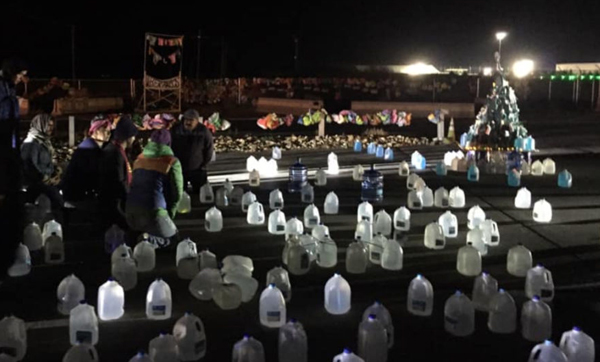 Stilt-walkers Visible Over the Fence

One of the most effective elements of this particular occupation was the use of stilt walkers next to the detention center’s fence.  Regina Armenta, who has been a professional stilt walker for the past decade, but had never put her skills to use in an activist context, was joined by Amy Christian, one of her all-time role models and the founder and Artistic Director of Wise Fool New Mexico.  Christian has been using stilt walking and puppetry for the promotion of social justice for decades.  Wise Fool is one of a growing number of “social circuses” worldwide.  (See the Social Circus section of the CircusTalk website for articles about other companies.) 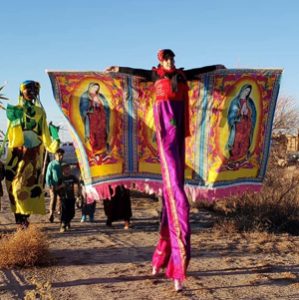 These women on stilts used their elevated vantage point to hold up big, beautiful puppets and banners with slogans like, “¡No Están Solos! (You Are Not Alone!),” so that children inside the detention center could see them over the camp’s fences, which were covered in black plastic in order to block communication through the fence. Vega describes the puppets as “whimsical, beautiful resistance.” Although they couldn’t see the kids’ faces, they could hear them cheering and crying on the other side of the fence at the sight of the puppets and banners.

Armenta says, “My great-grandmother was deported, and I grew up in the juvenile system, so I have a lot of personal feelings and connections to this situation at the border. From my time in institutions, I know what it’s like to be locked up, as a child. And I know the result of having a great-grandmother deported, how that affects the entire family, trickling down 3 generations. It really does affect everything.”

Christian says, for her, the quintessential moment of walking along the fence was knowing the kids knew “there are people out here fighting for you, who care for you, and who are going to keep fighting until something is done about this.” Those who weren’t up on stilts drummed and sang and shouted, and threw soccer balls over the fence with “¡No Están Solos! (You Are Not Alone!),” written on them. Somehow, in their own form of resistance, the kids inside the camp got their hands on markers and wrote their names on the balls, then threw them back out, over the fence.

Vega says, “As ugly and inhumane as [the guards] can be, we can be just as creatively, joyfully resistant. Artists are uniquely adapted to do incredible resistance work, because it’s rooted in how they think. Don’t be afraid to ask yourself how you can use your art in resistance work, and how you can collaborate with other artists to do the same. That kind of work is the heartbeat of the movement.” Christian agrees, saying she is, “Driven by desire to create welcoming spaces for dialogue, and create beauty that draws us into each other, and gives us an opportunity to see each other’s humanity” in her work with the Wise Fools.

For those who are interested showing some Revolutionary Love this Valentine’s Day weekend by joining the national Weekend of Resistance for Migrant Justice, Vega and her fellow organizers have created a handy Art & Media Kit, available for download, which contains more information about the protest, their demands, and tools for organizing in your own community. You can also donate to the occupation through their GoFundMe page.

About the Author – Amelia Parenteau 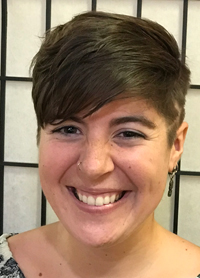 Amelia Parenteau is a freelance writer, translator, and theater maker based in New Orleans. An alumna of Sarah Lawrence College, she has worked with TCG, Ping Chong + Company, The Lark, The Civilians, the French Institute Alliance Française, Voyage Theater Company, and The Park Avenue Armory in New York, People’s Light in Pennsylvania, and the Eugene O’Neill Theater Center in Connecticut. Productions: America is Hard to See, Life Jacket Theatre Company (2018, HERE); (Projection) (2017, Dixon Place); Liminal (2015, New York International Fringe Festival). She is a member of the FENCE International Translation Network, and she has been published online in Asymptote Literary Magazine, Contemporary Theatre Review, Culturebot, Extended Play, and HowlRound, and in print in American Theatre Magazine. Find her work at www.amelia-parenteau.com.