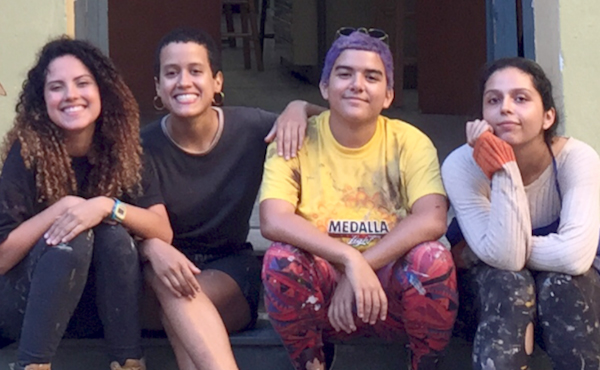 Colectivo Moriviví creates public art that boldly advocates for social justice. Their expansive work in Puerto Rico addresses domestic violence, systemic racism, climate change, and also celebrates the beauty and connectivity of local communities. What makes their work especially potent is that they collaborate with local citizens to plan, paint, and create their public artworks. 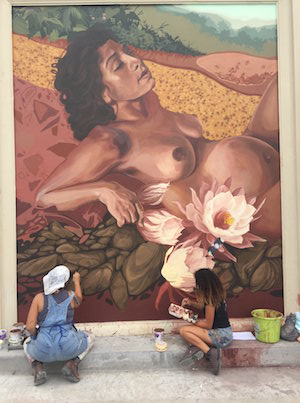 Colectivo Moriviví is made up of a group of women who studied together at Puerto Rico’s Escuela Especializada Central de Artes Visuales. They began collaborating on large-scale mural projects back in 2013. The collective takes its name from the so-called “shame plant”, embraced as a symbol of femininity in the Puerto Rican countryside. Moriviví (Mimosa pudica) is a creeping annual plant whose compound leaves fold inward and droop when touched or shaken in order to defend themselves from harm, and then re-open a few minutes later. It is the perfect metaphor for an art collective looking to spark a social justice movement.

The Moriviví women’s art collective focuses on the collaborative creation of murals which integrate beautiful images with social commentary. Much of their work focuses on the female form.

In 2015, the group collaborated with a Puerto Rican-based organization called Coordinadora Paz para la Mujer (Peace for Women) on a mural that centered on the issue of violence against women. When the mural was later defaced, the group responded to the censorship on Facebook, “Today, we must educate: if we can’t see and appreciate the image of the naked female body naturally and with respect, how are we going to respect every woman in our lives?”

In an interview with WomenArts, Sharon González Colón said that the collective’s early work quickly expanded from isolated urban art projects to large-scale, community-based mural-making. She says, “I believe this had to do with our style and the presence of the human figure. Since we paint with brushes, we’re able to teach and integrate untrained people and children into a community-based creative process. We realized that what we were doing had real significance – that it shouldn’t be only linked to us as individuals, but shared with the larger community.”

Community-engaged mural work innately highlights the values of teamwork, collective effort, oneness, and solidarity. Colectivo Moriviví has created a way of working that whole-heartedly involves the community. The participants learn how much effort it takes to produce a large piece of public art, and their communities take full ownership of the work long after the artists are gone. “Now we have other artists asking to work with us and learn from the process we’ve created”, says González Colón.

Colectivo Moriviví would like to establish a grassroots training program to teach muralism as activism to others. They are currently in the process of searching for funding and support for this transition. González Colón said, “Now we have our first apprentice!  We want to become a sustainable and productive ‘social organism‘ that works with allies and collaborators to address social needs and to further democratize art.” 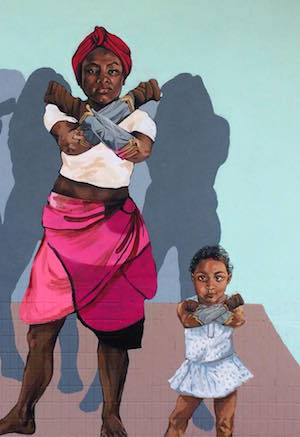 Looking to expand their reach, the group has been seeking opportunities to connect with Puerto Rican communities in the continental U.S.  Sharon González Colón and Joy Díaz are currently spending a semester at Hampshire College in Amherst, MA as part of the college’s Climate Refugee Program. In the wake of Hurricane Maria, the collective is even more motivated to continue their social justice work.

The nearby city of Holyoke, MA has the highest percentage of Puerto Ricans in the country (44.7%) according to Wikipedia.  “There is a lot of community organizing going on in this region with organizations such as Nueva Esperanza, Nuestras Raíces, and Enlace de Familias,” says González Colón.  “We are already connecting and speaking about what projects we can develop together. We want to start a conversation between the Puerto Rican diaspora and the people on the island.”

Colectivo Moriviví is looking for strategic partnerships and financial support for future projects based in Puerto Rico and beyond.  If you are interested in supporting their efforts through a donation or the purchase of a limited edition print, please contact Sharon González Colón via their website:  www.colectivomorivivi.com.