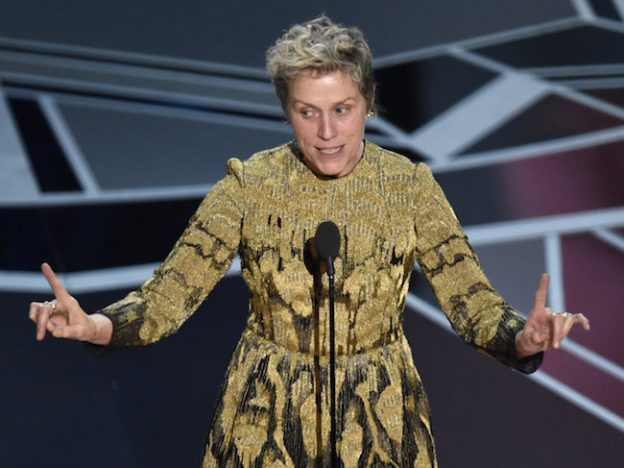 Frances McDormand during her Oscar acceptance speech for a lead role in Three Billboards Outside Ebbing, Missouri. Photo: Chris Pizzello/Invision/AP

Frances McDormand gave an unexpected rallying cry for gender parity in films at the end of her acceptance speech for her Oscar for Best Performance by an Actress in a Leading Role.  During an evening where 33 men won Oscars and only 6 women, McDormand said, “I have two words for you – inclusion rider.”

McDormand was referring to a legal strategy for increasing intersectional gender parity that is the brainchild of Stacy L. Smith, the prolific founder/director of the USC Annenberg Inclusion Initiative, the leading think tank studying diversity and inclusion in entertainment.  Smith has been urging film actors and content creators to fight “Hollywood’s epidemic of female invisibility” by negotiating for inclusive hiring practices as part of their employment contracts.

Smith argues that since actors and content creators negotiate for all kinds of special terms (“riders”) in their contracts related to their hours, housing, transportation, and other working conditions for each film, they could also use their bargaining power to promote the hiring of more women, including women of color and women in other under-represented groups. Through their inclusion riders, actors and content creators will hopefully persuade producers and directors to think of diverse hiring as an integral part of their creative process instead of some onerous external requirement. 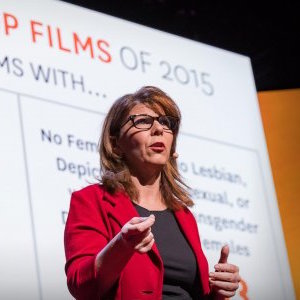 Smith’s research has included extensive interviews with producers and directors, and she has found that their hiring decisions are often shaped by unconscious biases rather than intentional sexism or racism. They were not opposed to hiring diverse casts – but they were in the habit of hiring white men.

Inclusion riders can serve as consciousness-raising tools that encourage the producers and directors to consider gender,  race, and other demographic factors in their hiring decisions instead of just going with their unconscious biases that favor white men.

For instance, Smith has found that most feature films have about 45 speaking roles, and most of them are not the leads or even secondary characters. There are usually many minor characters who only speak a few words, but in a big-budget film those small roles pay well.  Those roles are routinely given to white men, but an A-list actor negotiating to join a film could use an inclusion rider to ask the producer to fill those lower-level speaking roles with people who reflect the world we actually live in.  This would mean that about half of those roles would go to women, and that people of color, LGBT people, people with disabilities, and other marginalized groups would also be represented proportionally in each gender.

Smith estimated that if notable actors cast in the 25 top films of 2013 had made use of inclusion riders in their contracts, the proportion of balanced films (i.e. films with half-female casts) would have jumped from 16 percent to 41 percent – a substantial increase in employment for women with no extra cost to the producers.

Stars Who Are Using Inclusion Riders 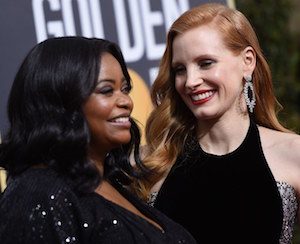 This past January, during a Women Breaking Barriers panel at the 2018 Sundance Film Festival, Octavia Spencer explained how Jessica Chastain used a rider to secure equal pay for Spencer in their upcoming film Molly’s Game.

“[Octavia] had been underpaid for so long,” Chastain explained. “When I discovered that, I realized that I could tie her deal to mine to bring up her quote. Men should start doing this with their female co-stars.”

Many A-listers have taken action since McDormand’s speech. The Hollywood Reporter released a story announcing that Paul Feig is the latest filmmaker to adopt an inclusion rider for the projects produced under his banner, Feigco Entertainment.

Thanks so much to Stacy L. Smith for her decades of brilliant research and advocacy,  and to Frances McDormand for shining a spotlight on this simple and effective strategy for increasing employment for women and for making sure that films reflect the demographic realities of our times.

More on Inclusion Research and Riders

Inequality in 900 Popular Films: Examining Portrayals of Gender, Race/Ethnicity, LGBT, and Disability from 2007- 2016
This 50-page study by USC Annenberg’s Media, Diversity & Social Change Initiative examines a decade of popular films and finds that women, people of color, and people with disabilities are consistently under-represented.  The first five pages provide many helpful charts and graphs that summarize the findings of the study.  Here are a few sample findings:

The Inclusion Rider Template from the Annenberg Inclusion Initiative
This is a sample inclusion rider that could be adapted to use in contracts for actors or content creators.