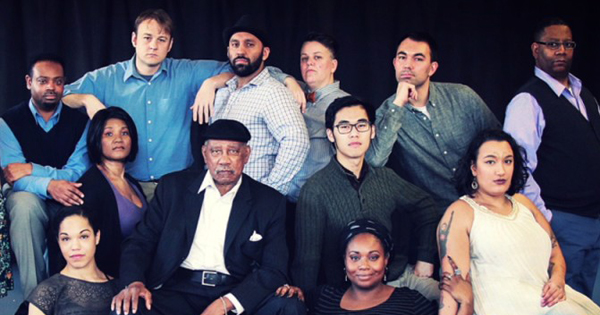 One in five Americans identifies as having a disability and they span all ethnicities, genders, and ages. And according to the Center for Disease Control (CDC) disability is even more common in women (1 in 4) and minorities (3 in 10). So where are their stories? This season, you’ll find them at Sound Theatre Company in Seattle, WA.

Sound Theatre’s 2018 season is called The Human Family: Toward A Radical Inclusion, and features artists living with disability. They will present the comedy classic, You Can’t Take It With You with an inclusive cast, an ASL version of Midsummer Night’s Dream, and the world premiere of Rules of Charity, a play about the relationship between a wheelchair-bound father with cerebral palsy and his caretaker daughter.

The company is also offering their Making Waves program, which includes a series of readings of plays by disabled playwrights, art exhibitions, accessible performances and other experimental works.  All programming will be made accessible for audience members with disabilities. 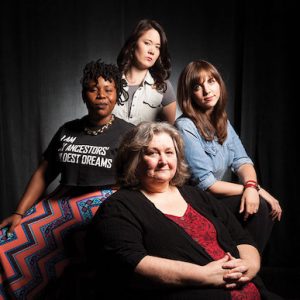 When disability is depicted onstage, it is usually framed within a stereotypical narrative of uplift and courage. Roles in such productions are often offered to able-bodied actors, which means that most actors with disabilities don’t even get the opportunity to play themselves. Obviously, theaters should give priority to disabled actors in roles defined as disabled. The next step, of course, is to consider them for all roles. Thuman says, “Human disqualification is rampant. We desperately need different bodies represented on stage.”

“There are great innovations happening around the country in these creative, evolving dramatic forms of cultural inclusion; I believe we in Seattle are behind in embracing this exciting theatrical movement,” said Thuman in a statement. “These days particularly, everybody needs to be invited to laugh, to love, to celebrate family and to dream of a better world. We also look forward to a long overdue conversation about the importance of people with disabilities in our art, our theatre, our storytelling and every aspect of our modern lives.” 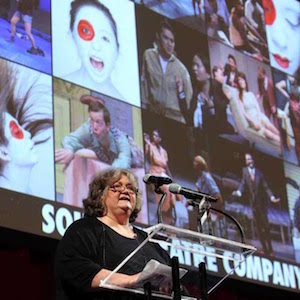 Teresa Thuman accepting a Gregory Award for Theatre of the Year on behalf of Sound Theatre Company.

Sound Theatre Company is not alone in their quest to reframe disability on and off stage. On March 1, 2018 Roundabout Theatre opens their production of Amy and the Orphans, a new play by Lindsey Ferrentino, which stars Jamie Brewer, an actress who has Down syndrome. Brewer and her understudy Edward Barbanell are the only known performers with Down syndrome to play the lead in an Off-Broadway or Broadway theater production.

In 2015 Mixed Blood Theatre founded the Disability Visibility Project, and solicited forty theatre professionals to share plays that they feel best speak to disability in two ways: plays with theme or content on disability and/or plays with characters with disabilities.

Sound Theatre’s first offering in their new season is “You Can’t Take It With You”, Directed by Teresa Thuman and Assisted by Sadiqua Iman. It runs February 24 – March 11, 2018 at Center Theatre at the Seattle Center Armory. For more information, visit www.soundtheatrecompany.org.

National Arts & Disability Center (NADC)  The mission of the NADC is to promote the full inclusion of audiences and artists with disabilities into all facets of the arts community.

Alliance for Inclusion in the Arts is a nonprofit that promotes full diversity in theatre, film, and television. They focus on authentic dialogue about race, culture, and disability that embraces the complexity of underlying social and historical issues. Formerly called the Nontraditional Casting Project, they have a disability advocate on staff.

Disability and Theatre: A Practical Manual for Inclusion in the Arts by Stephanie Barton Farcas.