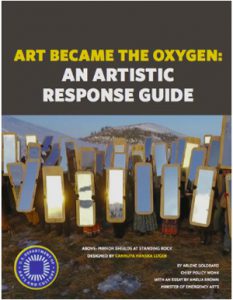 The U.S. Department of Arts and Culture has just published Arts Became the Oxygen: An Artistic Response Guide. The free, downloadable, 74-page booklet is an excellent new resource for artists who are looking for creative ways to respond to current events.  It is packed with lively descriptions of artists who are helping communities respond, recover, and rebuild after natural disasters like Hurricane Katrina or Sandy or social emergencies like Ferguson or Standing Rock.

The title of the guide was taken from an interview with Carol Bebelle, Co-founder and Executive Director of Ashé Cultural Arts Center in New Orleans.

The quote below is about Ashé’s experience after Hurricane Katrina in 2005, when people returned to the city seven or eight weeks after the storm:

“People needed something magical to help them feel better enough to face the next day. Every day was a reminder of irreversible loss . . .  So we had art as a healing force: music, the opportunity for people to be together and to find creative ways in which to interact. This became the work that we did.” 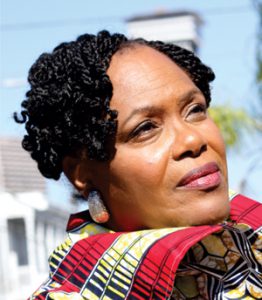 Many of the projects in the guide would be easy to replicate. For instance, the cover of the booklet features an image of the Mirror Shield Project conceived by multi-disciplinary artist Cannupa Hanska Luger. Inspired by women in the Ukraine who carried bathroom mirrors into the streets to show the riot police what they looked like, Luger designed reflective shields for his community at Standing Rock out of masonite and vinyl – materials you can find in any hardware store.  He created a video about how to make the shields, and a group in Minnesota made 500 of them.

Towards the end of the guide there are five pages of links to detailed descriptions of projects in every art form – dances created for protest marches, poetry created to describe poor housing conditions, plays and murals created in response to natural disasters, and much, much more.

The guide includes information about ways for artists to partner with government agencies.  There is also helpful advice about the ethical considerations of doing community-based work – especially when artists are entering a community to work with trauma survivors.

The Los Angeles-based musician, Milck, organized an a cappella flash mob performance of her song, I Can’t Keep Quiet, at the Washington, DC Women’s March, and the song went viral.  To download the sheet music and see more videos (including one on Full Frontal with Samantha Bee), please visit https://www.icantkeepquiet.org/thesong/. 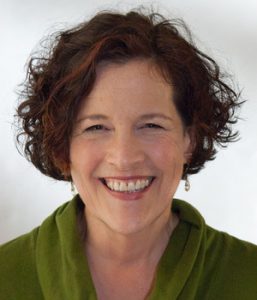 Arlene Goldbard, the author of Art Became the Oxygen and the co-founder / Chief Policy Wonk of the U.S. Department of Arts and Culture, will be hosting a free webinar this Tuesday, August 29 from 6 p.m. – 7:30 p.m. Eastern Time/3 p.m.- 4:30 Pacific Time.

She will be interviewing 3 artist-activists who are featured in Art Became the Oxygen.

Sign up for this online Citizen Artist Salon now>>

The Salon will feature:

Goldbard says, “If you’re engaged in artistic response to build caring, protest, or resilience in the midst or wake of crisis; if you work with a funder or emergency management agency; or if you’re considering getting involved and want to know more, this Salon is for you.”   Sign up now>>