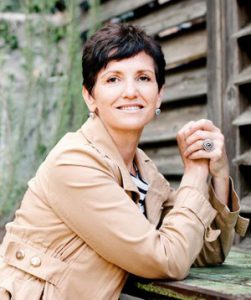 Many women artists have wondered whether there were any laws they could use to fight the pervasive gender discrimination they have experienced.  Study after study has shown that these women are not getting their fair share of opportunities.  Why can’t they just bring a lawsuit to solve the problem?

In 2011, film director Maria Giese began researching and writing about the possibility of using a class action strategy under Title VII of the Civil Rights Act of 1964 to address the pervasive pattern of discrimination against women directors in Hollywood.

As a result of Giese’s persistent activism, the Equal Employment Opportunity Commission (EEOC) began an industry-wide investigation on behalf of women directors in Hollywood in 2015.  Giese is hopeful that the EEOC’s findings will lead to a settlement with the six major studios that would substantially increase job opportunities for women directors in film, television, commercials, and new media.

What is Title VII?

Title VII of the Civil Rights Act of 1964 is a federal law that prohibits employers with 15 or more employees from discriminating against employees on the basis of sex and other protected categories. It only covers women working in traditional employer-employee relationships where the employer controls what is done and how it is done.  Many women directors are not protected by Title VII because they work as “independent contractors” instead of as “employees” or they work in organizations with less than 15 employees.

The Equal Employment Opportunity Commission is the federal agency responsible for enforcing Title VII as well as other employment discrimination laws, and their website has information about the various laws and how to file a claim.

But individuals are not likely to bring claims in Hollywood, and so the law is not effectively enforced there.  As Giese explains, “The industry is small and based largely on personal relationships.  If you file an individual discrimination lawsuit, you must be prepared to give up your career as a director because that is what will happen – you will get blacklisted.”

In the more than five decades since the Civil Rights Act of 1964 was passed, the EEOC has not been able to make Hollywood comply with Title VII.  As Giese puts it, “Hollywood has kept women filmmakers shut out for decades because it is allowed to self-regulate and faces no effective oversight body.” 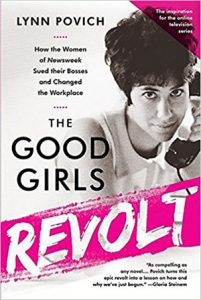 Lynn Povich’s book discusses the successful use of Title VII to improve women’s hiring at Newsweek.

Women who do their creative work as employees have had success using Title VII to fight gender discrimination in the past. In her book The Good Girls Revolt: How the Women of Newsweek Sued Their Bosses and Changed the Workplace, Lynn Povich describes how 46 women employees at Newsweek magazine brought a Title VII action in the 1970s because they were relegated to support roles while the men wrote the stories.  Their action forced the magazine to employ women writers and editors and to move toward equalization (a process that is still underway).

Giese was determined to reveal that the Directors Guild of America is controlled by its mostly male members who want to preserve their own jobs.  The DGA’s efforts to help women directors have been undermined by this intrinsic conflict of interest. She says, “DGA-studio diversity programs have persistently failed because of this.  During the 20-year period from 1995 to 2015, the number of women directors actually declined.  Clearly, a powerful independent and impartial oversight body needs to be put in place.”

After the Women of Action Summit, and after failing to convince the EEOC to intervene on behalf of women directors, Giese approached the American Civil Liberties Union (ACLU) to talk about an industry-wide action under Title VII based on the low employment figures for women  directors.  Even if most feature film and commercial directors are deemed “independent contractors,” the directors of episodic television programs fulfill almost all of the qualifications the EEOC uses to define an “employee,” making legal action under Title VII more viable.

It took time to move the matter forward because it was  technically challenging.  It was hard to gather the evidence because many women were afraid to share their experiences and risk being labelled as trouble-makers.  Also, the lines between “employees” and “independent contractors” are blurred by questions about who writes the checks.  Thousands of production companies (some independently owned and some existing under mother companies comprised of studios and networks) open their doors, produce a film, and then close, never to re-appear again – making it hard for the EEOC to track and monitor them.

Based on the information and core group of women directors Giese introduced, the ACLU established a confidential website, “Tell Us Your Story,” and spent two years talking to a growing group of women film directors on a monthly basis.  Finally, in May 2015 the ACLU presented the results of their research in a 15-page letter to the EEOC, calling on the commission and two other agencies to investigate gender discrimination in the hiring of directors at Hollywood studios for feature films and episodic television shows.

The ACLU’s letter cited statistics (women directed only 7% of the 250 top-grossing films in 2014 and only 14% of 3,500 television episodes in 2013-14), as well as anecdotal evidence gathered from more than 50 women directors.  Their goal was to show that there was a systemic pattern of gender discrimination.

Although federal law does not allow the EEOC to confirm or deny the existence of a charge, it was clear that the EEOC had begun an investigation when the agency summoned Giese and other women directors for interviews just five months after the ACLU letter was delivered.  Giese says there are now reliable reports that the EEOC has been in settlement talks with all six major film studios for perhaps as long as a year.  She is hopeful that an agreement will be announced soon.   “For the settlement talks to succeed,” she says, “all six studios must unanimously agree to a settlement that satisfies the EEOC. If they fail to do so, the EEOC will file a lawsuit against all six studios in a federal court. A case like this could go all the way to the U.S. Supreme Court.”

There has been concern that President Trump is appointing more conservative commissioners to the EEOC, who may decide to let the investigation slide, but Giese says the EEOC has indicated it will stay the course.  Giese points out that a successful outcome in these negotiations “will score a path for all women in all creative positions and shine a powerful light on the United States as a leader in social justice.”

She adds, “This is a civil rights argument about who creates the content of our cultural narrative and who helps form the voice of our civilization.  If women cannot participate equally in our nation’s storytelling that is tantamount to the silencing and censoring of half the population.  All people who care about equality and American values should fight with all their moral and legal might to make our federal government enforce the laws that could give substance to our ideals of freedom, equality, and social justice.” 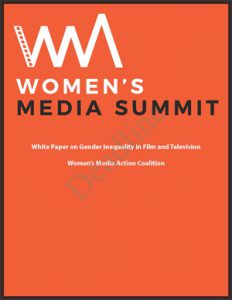 Click the image above to read the Women’s Media Action Coalition’s White Paper.

They then co-authored a Media White Paper with leading academics from Stanford University, Emerson College, and Occidental College, based on input from the conference participants that identified seven strategies for reforming the entertainment industry.

To follow up on the recommendations in the white paper, they launched the Women’s Media Action Coalition (WeMAC.org ) to house the seven committees actively working on each of the strategies:

You can find out more about ways to get involved with the Women’s Media Action Coalition and its committees on their website at http://wemac.org/.

SPECIAL THANKS:  Special thanks to Cynthia L. Cooper for her thoughtful contributions to this article, and to Maria Giese for her vision and inspiring perseverance in the fight for gender parity for women in film.