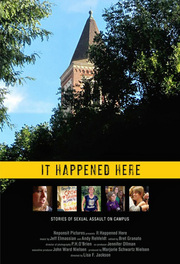 The White House is promoting “It Happened Here” to colleges.

In this compelling new documentary, Jackson explores the issue of sexual assault on America’s college campuses.  The film is so powerful that the White House recently decided to promote it to colleges across the country as part of a new initiative to stop sexual assaults on campus.

The film focuses on five survivors. These brave young women describe surviving sexual assault only to be met with apathy, disbelief, blame and retaliation from the authorities – college administrators, local police departments and the courts. While trying to report the crimes, they were ignored, belittled and shamed, while their attackers remained on campus with impunity.

Instead of hiding away in shame, these five young women–Kylie Angell, Erica Daniels, Anglie Epifano, Carolyn Luby, and Sarah O’Brien–chose to speak out and find a way to force institutional change.  Student activists Kylie Angell (University of Connecticut) and Kyndall Clark (University of Pennsylvania) will be present at the screening and will participate in a Q & A moderated by Jan Lisa Huttner following the screening.

This special screening is sponsored by the Empire State Virtual Branch of the American Association of University Women (AAUW), in collaboration with Cinedigm and Quad Cinema.