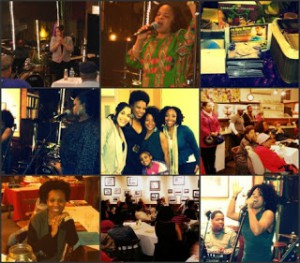 Collage from the “I’m Every Woman” SWAN Day Event

It’s hard to believe it’s been almost three months since the fifth international SWAN Day! We’re  continuing to profile the amazing women who make SWAN Day events happen all over the globe. This year, one of our most delightful discoveries during SWAN season was the Liberated Muse Arts Group, who put on a SWAN Day concert on March 30, 2012 in Washington, D.C. featuring long-time Liberated Muse artists. The event, called “I’m Every Woman,” was held at The Potter’s House, and included musical performances by Teisha Marie, Quineice, Colie Williams, Mama Moon, Lea, and the show’s organizer and Liberated Muse founder Khadijah  “Moon” Ali-Coleman. Singer and musician Derrick Marquis also paid tribute to women in music with a medley of songs by female soul musicians. The event was a great success, with the musicians selling over 40 CD’s during the two-hour concert.

Here at WomenArts, we were captivated by the promotional video for “I’m Every Woman,” which features music by jazz singer Dianne Reeves and photos of all the performers. The song’s positive message of hope and commitment to the arts against a history of oppression resonated with us, and we wanted to find out more about this powerful group of women. 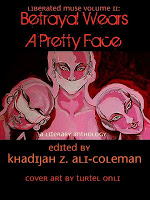 The Latest Publication from
Liberated Muse

It’s not surprising that the “I’m Every Woman” SWAN Day concert was such a success, given the history of Liberated Muse. Founded in 2008 by Khadijah Ali-Coleman, a writer, educator, performer, and creativity coach, as an online community for artists to share news, photos, videos, and performance opportunities, the group began producing the Capitol Hip Hop Soul Fest, a Washington D.C. hip hop festival that ran from 2008-2010. Liberated Muse Arts has continued to build on its mission to produce multi-cultural arts events in non-traditional arts spaces as well as providing arts workshops, online content management, and PR services to artists and small businesses.

Highlights from the group’s relatively short but action-packed history include the publication of two books, edited by Ali-Coleman: Liberated Muse I: How I Freed My Soul and Liberated Muse II: Betrayal Wears a Pretty Face, as well as two theatrical productions, both written by Ali-Coleman: Running: AMOK, a musical about becoming a mother, and In Her Words, a celebration of the lives and work of Lucille Clifton, Zora Neale Hurston, Lena Horne, Nina Simone, and Billie Holiday.  Both shows were produced to rave reviews.

Liberated Muse continues to produce arts events – most recently, another showcase of musical talent on June 16, 2012, for The Artomatic, during which Washington, D.C. artists take over an 11-story building in Crystal City, VA, that is slated for demolition, and transform it into a month-long celebration of creativity, featuring workshops, exhibitions, concerts, seminars, and other events that are free and open to the public.

We were thrilled to learn that Ali-Coleman has been honored for all of her amazing work by being named one of Prince George’s County Social Innovation Fund’s 40 Under 40. We can’t wait to see what she’ll do next!

If you’re in the Washington, D.C. area, be sure to check out Liberated Muse‘s upcoming events and like them on Facebook. And wherever you live, click on the links in this article to be introduced to some very talented musicians and artists who will be sure to inspire you to liberate the muse inside yourself.