Honoring the Past While Creating the Future:An Interview With Kim A. Clarke, Founder and Organizer of the Lady Got Chops Women’s History Month Jazz Festival 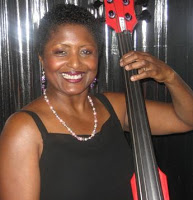 Kim A. Clarke, Founder of the Lady Got Chops Festival

Ten years ago, jazz bassist Kim A. Clarke started a festival called Lady Got Chops in New York City to showcase and celebrate women jazz musicians. Lady Got Chops has grown into an annual event during Women’s History Month, and has also become a SWAN Day event.

Inspiration for the Lady Got Chops festival came in 2003, when Clarke was called to sub for another bassist at a new club in Brooklyn called The Jazz Spot, which was owned by a mother-daughter team, Lillithe Meyers and Tiecha Merritt. Clarke was impressed with the two women’s entrepreneurship, and Meyers and Merritt were happy to see a female musician come through the doors.

They asked Clarke where all the other female jazz musicians were. Clarke had toured with saxophonist band leader Kit McClure and her all-women Big Band, so she knew plenty of other women musicians, and before long, she and her new friends were planning a celebration in honor of women’s history month. They decided to focus primarily on women jazz instrumentalists, since they tend to be more overlooked than vocalists. The club provided the space and food, and Clarke created a website, made flyers, booked the musicians, and promoted the event.

“In particular, we wanted to address the anonymity issue, as refers to women (primarily instrumentalists) in music as well as provide a platform for those who had never met to enjoy an evening of performing together outside of their comfort zone,” reminisced Clarke about that first festival.

Lady Got Chops was so successful that it continued as an annual festival at The Jazz Spot, which only seated 45 people, until the venue closed permanently in 2009. Since then, the festival has been held in various spots around New York City – 43 different venues have been featured.

WomenArts interviewed Clarke, who has played in numerous bands – notably, she is the leader of MAGNETS! West Coast-East Coast music project – about the history of the festival, the challenges faced by women jazz musicians, and the musicians who inspire her.

WomenArts: How has the festival grown and changed in the past 10 years?

Clarke: The Jazz Spot closed its doors permanently in 2009 after the 7th festival – ill health took its toll on Lil after exposure at the WTC [collapse of the World Trade Center following the September 11, 2001 terrorist attacks]. The 8th, 9th, and 10th festivals were held in a total of 43 venues thereafter through the interest of friends who would share their bookings and clubs and who were interested in honoring Women’s History Month. We raised money for Doctors Without Borders in 2010 for earthquake relief in Haiti. The venues extended from churches to art galleries, from wine tasting venues to museums, from performance spaces to libraries. It’s become a free advertising event for me, as I still need to seek employment as a performer and may have a few more possibilities as a bassist during this time. It’s a two-edged sword – I spend a great deal of time trying to meet print materials deadlines, booking the events I have control of, and including those who have booked their own while being a professional musician.

WomenArts: Can you tell us about a few highlights from this year’s festival?

Clarke: The main highlight for this festival was honoring Cobi Narita, the founder of the Universal Jazz Coalition and International Women In Jazz, who is now in a wheelchair with Parkinson’s, as well 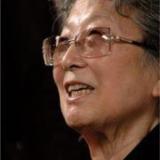 as Wendy Oxenhorn, the CEO of the Jazz Foundation of America, and my original co-producers Lillithe Meyers (also infirm due to WTC exposure) and Tiecha Merritt, the Jazz Spot owners. To have these ladies in the same room, to feed them and to present them with plaques as well as perform for them, was such an honor for me personally. The idea originally came from our friend, saxophonist Carol Sudhalter. The venue was the Dwyer Cultural Center, a new artistic space in Harlem. Another honor was for two of my old friends who have done so well in music to permit me to list their events with the rest of the festival: Cindy Blackman-Santana and the brilliant Carmen Lundy. I was also honored by Rome Heal and given the Golden Shakere Award. Here is a link to the full festival schedule. 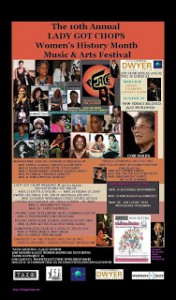 WomenArts: How did you first discover jazz? Which artists were your early influences?

Clarke: My father grew up with New York jazz notables – my grandfather was a touring vaudevillian trombonist turned acoustic bassist (he passed on in 1967). Dad worked for transit but played big band and bebop music every morning while dressing for work. He also played records at home as well as cutting a mean jitterbug with Mom. Those were my earliest jazz influences. I took ballet from age 3 til about 12 and liked what the pianist was doing more so than the workout I was getting – lol. My babysitter brought in all the Hendrix, Otis Redding, R&B, etc. Mom loved the “gutbucket” blues of the south. I started playing at 17-18, but my jazz training came 4 years after I was already playing along with my favorite records in the R&B genre. I met a friend at Bennett College who told me about the Jazzmobile program of study on Saturdays. I enrolled and had classes with the likes of Jimmy Heath, Jimmy Owens, Victor Gaskin, JohnStubblefield, Lisle Atkinson and Charlie Persip. I transferred to CCNY [City College of New York] and studied with John Lewis of the MJQ [Modern Jazz Quartet] and was awarded three grants to study jazz with Ron Carter, Buster Williams, and Lisle Atkinson consecutively. I was a pre-med major prior to all of this – didn’t read a note of music. I was later introduced to the Barry Harris improvisation workshop and later became the house bassist for the Jazz Cultural Theatre Jam Session: Art Blakey Breakfast Jam. My most influential artists were the ones I knew and played with: KennyGates, Jeff King, Art Blakey Jr., Evelyn Blakey, Don Echos, George Braith, Gilly Coggins, Leon Thomas, Clifford Jordan, Eddie Jefferson, Philly Joe Jones, Jo Jones Jr, Jimmy Lovelace, Eddie Henderson, Tommy Turrentine, Clarence C. Sharpe, Richard Williams, Gerald Hayes, Louis Hayes, Wallace Roney, CindyBlackman… so many…

WomenArts: Can you talk about one or two women jazz musicians who really inspire you?

Clarke: The first woman to inspire me to play music was Cynthia Robinson, best known for being the trumpeter and vocalist in the popular and influential psychedelic soul/funk band Sly and the Family Stone. Robinson is notable for being one of the first (both) black and female trumpet players in a major American band.

Cynthia Robinson Playing Trumpet
With Sly and the Family Stone

WomenArts: As a woman jazz musician, what is the field like?

Clarke: I guess the older one gets the more the perspective changes. Women are always viewed as more than just musicians – I do believe in music, as well as politics or any other public occupation, having the aptitude is mandatory but the looks are the deal closer… Yeah I said it – lol.

WomenArts: Do women in jazz experience discrimination? Is it more difficult for female jazz musicians to find work?

Clarke: Of course. Absolutely. Everything is about quick sales and marketability. Number 1 – jazz is an outsourced art form – more respected abroad than in the U.S. Number 2 – sex sells and the submissive side of women is the accepted norm; therefore playing jazz with a vengeance short circuits the common male-dominated imagery… and it’s being done. However, the less heady art forms and female images get infinitely more publicity.

WomenArts: What do you love most about jazz? Why is it such an important art form?

Clarke: Jazz – or BAM (Black American Music) as it is being called by some – is music of soul suffering spirit trying to extricate from pain with a smile on its face despite the insults and omissions… it’s a language which was born of the socio-cultural reality that is uniquely African-American – Euro-Asiatic – Caribbean – it reflects humanity from the depths of the brothel to the parlors of the rich and the church. It’s the global export that precedes the internet – I personally have found folk who don’t speak English but because of world wars know the music of my fathers and play the heck out of it as well. Mathematically speaking, good jazz, like good classical, makes one think on a deeper level… I love jazz because of the many I’ve met and the insights they’ve shared – their love of the music as well as the pain of choices. It’s a mountain… when you get to the top you can see a bit further.

Thanks to Clarke and the other women who participate in Lady Got Chops, we can all see a bit further into a future in which women musicians have the same opportunities and receive the same respect as their male counterparts. Be sure to follow the many links within this interview to listen to the musicians who inspire Clarke – and be sure to check out her website to get a taste of the music she plays, undoubtedly inspiring others.