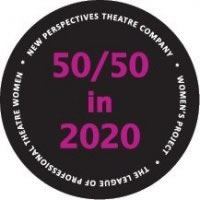 As a follow-up to last week’s post on the Los Angeles Female Playwrights’ Initiative, this week we’ll be taking a look at the movement that spawned the West Coast group: the New York-based 50/50 in 2020 initiative. Created in response to the 2009 Sands Study, which confirmed the 2002 statistic that fewer than 20% of professionally produced plays in the U.S. are written by women, 50/50 in 2020 is a participatory movement with the goal of achieving parity for professional women theatre artists by the year 2020.

50/50 in 2020 was created by three women who have extensive firsthand knowledge of the theatre community and what it means to be a woman working within it: Susan Jonas (NYU), whose 2002 NYSCA Study, Report On The Status Of Women: A Limited Engagement? brought the abysmal statistics on women’s representation in theatre to the attention of the theatre community (her 20% statistic had not changed as of the 2009 Sands Study); Melody Brooks, Artistic Director of New Perspectives Theatre Company; and Julie Crosby, Producing Artistic Director of Women’s Project. Allied with The League of Professional Theatre Women, which is celebrating its 30th anniversary this year, the movement’s founders set the goal of achieving full representation for women in theatre by 2020.

The movement supports works written, directed, and/or designed by women in the professional theatre, and advocates for more opportunities for women to be involved in professional productions, as well as equal pay for women in theatre. Although the official initiative began in 2009, it builds upon years of work by the women – and their organizations – who decided it was finally time for a national movement.
Women’s Project, founded by Julia Miles in 1978, is the oldest theatre company in the U.S. dedicated to producing and promoting theatre created by women. An impressive lineup of playwrights and directors have gotten their start at Women’s Project, including Eve Ensler, Lynn Nottage, and Paula Vogel. The company has staged over 600 mainstage and development projects and published 11 anthologies of women playwrights. Now under the Artistic Direction of Julie Crosby, Women’s Project continues to produce plays by women and offers a free, two-year development lab program for mid-career playwrights, directors, and producers. The lab offers artists the opportunity both to develop their craft under the mentorship of accomplished women theatre artists, and also to network with each other and create community, which is vital to the advancement of women in theatre.
New Perspectives Theatre Company (New York, NY) was founded in 1991 by Melody Brooks with the goal of developing and presenting new works not only by women but also by playwrights of color, particularly works that have a strong social justice component or deal with social issues. Like Women’s Project, New Perspective also has a lab development program for women playwrights, Women’s Work, to help advance itsmission to showcase “a range of voices that reflect the true diversity of contemporary America.” 50/50 in 2020 seems a logical outgrowth of this mission.
The League of Professional Theatre Women was another logical partner for the 50/50 in 2020 movement. For 30 years, the organization has advocated and promoted opportunities for women in the professional theatre, as well as provided a community for networking and mutual support.
The cornerstone of 50/50 in 2020 is Works By Women, a group that goes to see productions written, directed, and/or designed by women in New York. Any woman can submit a show for consideration for listing on their blog and for a possible group outing, though shows must be on Broadway, Off-Broadway, or Off-Off-Broadway. Works By Women also profiles women theatre artists and their shows in articles and interviews on the blog. They organize theatre-going events through a Meetup group organized by director Ludovica Villar-Hauser, and the group often receives discounts on tickets from producers and theatres. These group trips to see shows by women are wonderful opportunities for women working professionally in theatre (as well as interested supporters) to meet each other, network, and create community while demonstrating that there is an audience for works by women.
One can’t help but envision similar groups springing up around the country, as one already has in Los Angeles, as the 50/50 in 2020 initiative grows. Why not start one in your community?
And if you are in New York and interested in getting involved, visit the 50/50 in 2020 Facebook page to meet up with the movement.