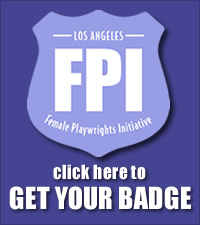 The Los Angeles Female Playwrights Initiative, or LAFPI, was formed almost 2 years ago by playwrights Laura Shamas and Jennie Webb as a local, West Coast branch of the national movement for gender parity in the world of American theatre. Shamas and Webb started the LAFPI as an outgrowth of the East-Coast-based 50/50 in 2020 movement (which will be the subject of a future WomenArts blog post), which was formed in response to the findings of the Sands Study.

Released in 2009 to media hype that skewed and obscured its salient findings, the study confirmed prior research that only approximately 20% of plays produced in American theatres are written by women, and that this fact stands in apparent opposition to the fact that many of the most successful plays (financially and critically) are written by women.

On their website, the LAFPI provides a great summary and analysis of the study, which concludes that producers conceive of works by women as less likely to be successful, and therefore works by women are held to much higher standards than works by men. Because of this “prophetic discrimination,” women receive far fewer opportunities to develop their craft than men do. And because their plays are not produced until they reach a level of craft that is difficult to achieve without the chance to have their work produced, many leave the profession before they have the chance to truly develop as playwrights. (For a comprehensive overview of the problem, see our collection of articles about Women’s Employment in Theatre).

The LAFPI began by commissioning a study of women playwrights in the Los Angeles area, and found that the national 20% statistic was true at the local level as well. They began working on a number of different fronts to address this paradox, with an infectious enthusiasm for their members’ works and a positive, action-oriented attitude toward the field as a whole. These womenknowthat they are making a difference, and they are excited about doing it.

Through their informative website and monthly newsletters, the LAFPI provides their members with information about submission opportunities of interest to female playwrights (similar to our WomenArts playwright funding newsletters, with a regional focus). They also have a Resources page that includes links for women playwrights to organizations around the country working for gender parity in theatre, as well as links for L.A. theatregoers and theatremakers, including a list of LAFPI member playwrights with links to their websites. The inclusion of resources for playwrights, producers, and audience members all on one page is representative of the LAFPI’s desire to create a community in which playwrights, producers, and audiences work together to make the L.A. theatre scene more interesting and diverse through the production of more works by women.

Membership in the LAFPI is free and open to anyone who wants to be a part of the movement. Members can download the LAFPI logos to show their affiliation on websites and print communications, and the group even has merchandise such as T-shirts and hats so members can show their solidarity.

In addition to facilitating and promoting the production of plays by women, the LAFPI is engaged in ongoing conversations about women’s representation in the field. Their blog features articles written by different playwrights about their work, the plays they’re going to see, and the experience of being a female playwright.

Finally, the group organizes in-person meet-ups to discuss the movement and foster community. Their latest discussion, The Collaborations Conversation, was scheduled for March 25, 2012, on the occasion of SWAN Day. Organized by Ella Martin, the LAFPI’s Study Director and the Artistic Director of Theatre Mab Town Hall, the event was open to “all theatre artists – male and female – who are interested in fostering new work for women theatre artists” and included a panel discussion with women theatre artists and professionals. Although this event had to be postponed due to torrential rains, there will be future events designed to bring playwrights, artistic directors, producers, and other collaborators together to form new partnerships for the future.

With their spirit of openness and inclusiveness, along with their incredible motivation, the LAFPI is taking action to ensure that L.A.’s women playwrights – as well as producers and audiences – have the opportunity to be part of the creation of a richer, more diverse theatre scene.

Find out how you can get involved at lafpi.com.