Made In Her Image is a non-profit dedicated to the advancement of young girls and women in film, media, and technology. It serves girls ages 8 to 18 with media literacy and empowerment programs.  Their goal is to create and build the future film pioneers and revolutionaries of tomorrow.

According to research by the USC Annenberg School for Communication and Journalism, only five women of color worked as directors on the 1,000 top-grossing films between 2007 and 2016. And women comprised only 5% of directors in the top 250 films in 2017.  Made in Her Image is working to change these statistics. Although all girls are welcome, Made in Her Image focuses on girls and non-conforming gender binary youth of color.

Founded in 2018 the organization will be hosting its first two film camps for girls this summer. The first will be in Phoenix, Arizona, and the second will be in Los Angeles. The 3-4 day camps will happen in June and July 2018.

Made in Her Image is currently developing the curriculum for the camps using tips and inspiration from other women in the industry.  The camps are being designed to empower girls by giving them opportunities to make their own mini- films.  Each girl will be partnered with a mentor in their own production groups. The camps will also include seminars, workshops, and a possible studio field trip option.  To register your daughter for film camp, please click here>>

In a statement from Made In Her Image: “We want our girls to create and be their own change – to be their own voice – no longer waiting on an industry to give them the images they want to see.” 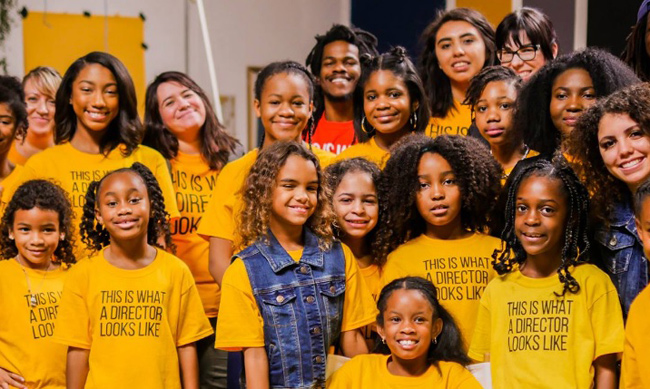 Students at a Made in Her Image Workshop