These appointments feel like a hopeful shift in theatre leadership even though three of the four new hires are replacing other women.  Although Margo Jones is credited with launching the regional theatre movement when she created Theatre ’47 in Dallas, Texas seventy years ago, and there have been many other visionary women leaders, most of the top-paying jobs in the field have been going to white men.

In fact, Women in Leadership in Resident Theater, a 2016 study commissioned by American Conservatory Theatre, found that women have never held more than 27% of the leadership roles in American non-profit theatres.  During the data collection period for this study in 2013-14, the researchers at Wellesley Centers for Women found that there were only 15 women artistic directors at the 74 LORT regional theatres around the country, and only one of them was a woman of color.  There were 19 women serving as Managing Directors or Executive Directors, and none of them were women of color. 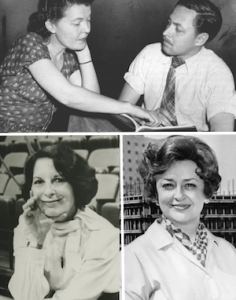 Given this context, it is not surprising that the four women who have managed to beat the odds to get these important positions are all powerhouses.

Pam MacKinnon is a Drama Desk and Tony Award-winning director known in the industry as a leading interpreter of Albee. MacKinnon has been named ACT’s new Artistic Director and succeeds Carey Perloff who helmed the theater for the past 25 years. With a budget of approximately $23.8 million*, ACT is one of the larger regional theaters in the country. MacKinnon currently serves as president of the Stage Directors and Choreographers Society (a union) and she is also chairwoman of the board for New York’s Clubbed Thumb, where she has been a champion of new plays. MacKinnon’s first day on the job is July 1, 2018.

Designer and producer, Jennifer Zeyl, is the curator and creative director of Genre Bender at City Arts Magazine and also the founding co-artistic director of Washington Ensemble Theatre (WET) in Seattle. Zeyl is Andrew Russell’s successor at Intiman Theatre, which has a budget of roughly $1.1 million. She has already spent two months on the job. In a statement about what to expect under her leadership, Zeyl said, “We will hold underrepresented stories to the light while centering new artists, unlikely combinations, and lived true stories, reminding our audience and artists alike that we are what makes America great.”

Rachel Fink, former Managing Director of Theatre Bay Area and Founding Director of Berkeley Repertory School of Theatre, has been named Executive Director of Lookingglass Theater, which has an annual budget of $5.6 million. An outspoken advocate for gender equity in the theatre, Fink recently served on the steering committee for the Berkshire Leadership Summit.  Fink succeeds Rachel Kraft and will begin work on February 19th.

Born and raised in Chile, Marcela Lorca is a director, choreographer, and master teacher. She became Movement Director for the Guthrie Theater in 1991, and has since coached more than 100 plays. She is also Head of Movement for the University of Minnesota/Guthrie Theater BFA Actor Training program. Lorca was named Artistic Director of Ten Thousand Things Theater Company, which has an annual budget of roughly $800,000. “I’ve known and admired Ten Thousand Things’ work for many years,” said Lorca in a statement. “The company’s imaginative staging of epic stories, its respect for actors, and its commitment to women and artists of color have been a source of joy in our community.” Lorca succeeds founding artistic director Michelle Hensley.

There are still more than 20 artistic director vacancies at major theatre companies across the country, along with a handful of executive and managing director positions. In TCG’s recent article, “American Theatre’s Leadership Vacuum: Who Will Fill It?“, Executive Director Teresa Eyring highlighted the importance of this transitional moment: “There absolutely is an opportunity to build a more inclusive and diverse leadership composition of the American theatre field. And there is absolutely a responsibility to recruit with a special eye toward identifying talent among women, people of color, trans people, and others.”

Despite these new hires, women and people of color still face serious “pipeline issues” as identified by the Women in Leadership in Resident Theater study. Here are some ways to help encourage an equitable shift in leadership:

Apply for the Jobs! If you feel qualified to be the Artistic Director or Managing Director of a regional theatre, please consider applying for some of the available jobs.  If you know other women who might be qualified, encourage them to apply too!  We need to cheer each other on!

Contact Board Members/Hiring Committees – If you know board members at any of the theaters that are hiring or if you are on the board yourself, please advocate for qualified women candidates to help them get the jobs.  Personal recommendations are often very important to hiring committees, and your positive comments about a candidate can make a big difference.

* Annual theatre budgets are from the 2016 fiscal year via Guidestar.