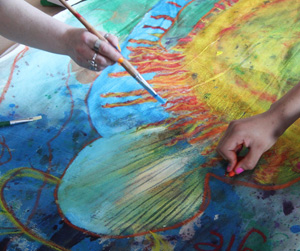 In a mining community about four hours north of Toronto, a group of Canadian women with lived experience in sex work and their allies have been involved in a multi-media, multi-disciplinary arts project. Project ArmHer aims to create a safe space where women can share their experiences about the stigmatization, violence, and lack of protection for people in the sex work industry.

About twenty women have been meeting for the past two years on a weekly basis to share knowledge and to heal from violence by creating art.  The participants – women with lived experience as sex workers and their allies –  are from all walks of life, but when they meet, they are equals who are working together to challenge stereotypes and change the conversation about sex workers.

Project ArmHer is a collaboration between Myths and Mirrors, an arts organization that engages Sudbury’s diverse communities in collaborative art-making, story-sharing, and community-building, and Sex Workers Advisory Network Sudbury coordinated by Tracy Gregory.

Gregory worked with visual artist Sarah King Gold, who was the Artistic Director of Myths and Mirrors, to assemble a creative team to work with the group.  They recruited Sarah Gartshore, an indigenous playwright who often focuses on marginalized voices, to shape monologues based on the women’s stories, and Cait Mitchell, a visual and media artist, to document the project. Sarah King Gold worked with the women to create masks and body maps (large art pieces on canvas).

On December 17, 2016, in honor of the International Day To End Violence Against Sex Workers, the women gave their first performance at the historic Grand Theatre in downtown Sudbury. While most events held to commemorate this day were vigils and marches, Project ArmHer was unique because of its holistic approach that incorporated visual art, film and theatre.

The setup included a large fabric screen on the stage that was used to create shadows and images. On either side of the screen there were large body maps created by the actors and participants in Project ArmHer hanging from ceiling to floor. There were spaces for monologues to be performed in front of the screen, stage left and right, that had red umbrellas as set pieces. There was a ramp leading up to the screen where performances happened as well. The video portion of the show was shown on a second screen that hung above the fabric screen used for shadows. 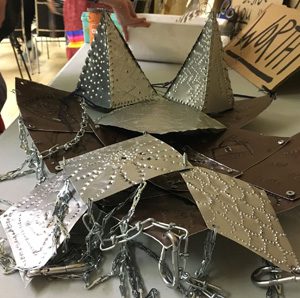 Armour worn by an actor in Project Armher’s performance

The evening consisted of  a series of monologues based on the women’s stories and shaped by Gartshore. Each monologue was a performance piece that included shadow and/or sound that supported the piece coming live through microphones set up backstage. During the performance there was traditional Indigenous Anishinaabe drumming and music, as well as contemporary singing. The show included videos; all of the recorded pieces were strung together and shown again at the end of the production.

Project Armher’s name is a play on the work “armour”, and one of the actors wore a suit of armour that was created for the performance.  Many of the performers had never been on a theatre stage before. Depending on their comfort level, some appeared in the videos.

The performance was warmly received, and the project has built strong bonds among the participants. According to Tracy Gregory, “Every word, every piece and everything that the audience witnessed has been reflected on, directed by and agreed upon by the entire Project ArmHer team.”

It has been a profound experience for everyone involved. As Sarah King Gold explained, ““The core of this creative process has been to explore deeply raw emotions around trauma, sexual violence and human worth. . . it has been an incredible healing experience for me.”

Playwright Sarah Gartshore agreed, “I started writing after our first meeting because it was so profound . . . This is the first time I have ever written something where it mattered how people took it. These are real people so it’s not just something from my imagination. . . I’ve grown so much from this project.”

The sex worker participants talked about feeling like survivors instead of victims, and discovering feelings of dignity, value, and self-worth.  As Tam Tam B said, “This project has changed my life. If I can help others I will.  It makes me powerful as a woman to know I am not alone.”  Video artist Cait Mitchell was deeply impressed by the bravery of the women sharing their stories.

The show performed in December 2016 showcased less than half of the material the group has generated. The creative team is building on the show already performed and adding new pieces, along with new art installations, new video, and choreography. They continue to meet every week for three hours of creation. In 2017 the group is scheduled to perform and present art installations across the provinces of Ontario and Quebec.

A Sample Monologue from Project ArmHer

Wolf At The Door

Lovers of bodies and lovers of men … lovers … in the alley, in the bed, in the courts and in your head, I’m beside you in your fight.

Lovers of children with full bellies and of paying the rent, lovers of brand new first day of school shoes and teaching your son to be a gent, I’m beside you in your fight.

Lovers of the belief that you are enough, no matter that you make your money in the buff. No matter, or because of this, you are human and worthy and full of grace … hey, sit this one out … we’ll finish the race. I’m beside you in your fight.

You are worthy of everything in linen and sundress, in skirt to the ground and bibles everywhere to be found, of Sunday dinner and swank night out, of a fresh smile and a sexy pout. You are worthy. You are. You. And I am beside you in your fight. 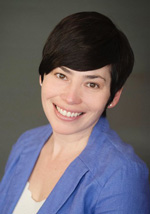 Laura Stradiotto is a writer based in Sudbury, Ontario, Canada, She has written for publications across Canada and the U.S. She has covered a broad range of topics from arts and culture to parenting, social justice and women’s health. She is co-founder of Latitude 46 Publishing, an indie press dedicated to the voices and stories of Northern Ontario.

Laura holds an MFA in Creative Non-Fiction from the University of King’s College in Halifax, Nova Scotia.  You can follow her on Facebook, read her Twitter posts, or find her on LinkedIn.