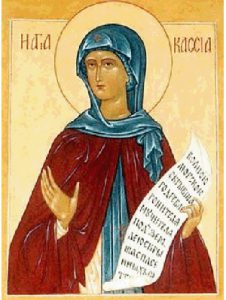 Kassia the Nun (810-865) was a prominent Greek woman poet in the Byzantine era. Read more on the Timeline>>

How much do you know about women poets?  Can you name women poets from other centuries or other countries?  Did you know that the first recorded poet was a Sumerian woman named Enheduanna who lived over 4,000 years ago in the region that is now Iraq?

The Mezzo Cammin Women Poets Timeline Project was founded in 2010 to help answer these questions.  The project’s ambitious long-term goal is to create a comprehensive database of women poets that will include an essay on every woman poet who has ever lived.  There are over 70 profiles so far, and more are being added every year.

If you visit the website of The Mezzo Cammin Women Poets Timeline Project, you can click on any of the date ranges in the horizontal row at the top of the page, and a list of women poets from that period will be generated.  For example, if you click on the timeframe “1900-2000,” the timeline software will generate a list of poets born in that century, organized by the poet’s birth date. If you click on the word “GO” next to the name of a poet in that list, you will be taken to a new page with a substantial essay about that poet’s life and work. 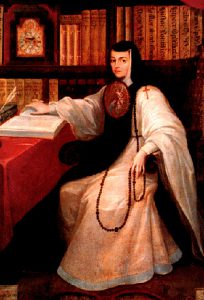 Sor Juana Inés de la Cruz (1648-1695) is regarded as the first major poet of the Americas and the intellectual mother of Mexico.  Read more on The Timeline>>

The Timeline Project was launched at the National Museum of Women in the Arts in Washington, DC, during Women’s History Month on March 27, 2010. The event drew high-profile artists and honored guests, including government officials, art administrators, poets, family members, and friends. The event was covered by NPR, PBS, The Connecticut Post,  and various headline news outlets.

It was a gala and global event, in a site used for inaugural balls.  Somi, whose latest album was #2 on the World Billboard Chart, performed live.  The keynote speaker was Alicia Ostriker, a women’s poetry icon known for her feminist Jewish verse.  Rhina P. Espaillat, Molly Peacock, and Terri Witek read from their poetry.  Carleasa A. Coates did a tribute to Lucille Clifton.  Alice Mizrachi was the artist-in-residence, and Annie Finch wrote the keynote poem. The Timeline Project website went live on the big screen at the event with a display of the entry for Rhina P. Espaillat, a global ambassador of poetry, originally from the Dominican Republic. 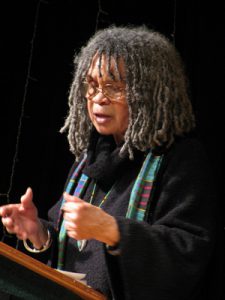 Sonia Sanchez, born in 1934, has written unflinching feminist poetry about racial turbulence in the U.S.  Read more on The Timeline>>  (Photo: Slowking)

A signature element of The Timeline Project events was introduced at the opening gala:  the women poets roll call.  Each woman fills out a card, including information about whether or not she self-identifies as a woman poet.  The cards are then collected, and the names quickly alphabetized.  There is a designated reader who calls each woman’s name in order.  As each woman poet’s name is read, she stands and keeps standing until all of the names of her sisters have been called.  The roll call is a deeply moving experience because it gives women poets of all ages and stages of experience an opportunity to stand together so that they can see and feel their solidarity.

There have been additional timeline events at the Pennsylvania Academy of the Fine Arts in Philadelphia (2013) and at Fordham University-Lincoln Center in New York City (2014).  At the Pennsylvania event, Rachel Hadas, Marilyn Nelson, and Sonia Sanchez read from their work, and Suzzette Ortiz and her band provided music.  The Fordham-Lincoln Center event, organized and run by Angela O’Donnell, featured Rhina P. Espaillat and Rachel Hadas reading from their poetry, and thirteen of scholars reading from their Timeline Project essays. A future event at Fordham-Lincoln Center is planned for October 2017.

There have been presentations about The Timeline Project at the Associated Writing Programs (AWP) Conference, Writing the Rockies (in the keynote presentation), Penn State, and the Southern Women Writers Conference.

Who Can Write for The Timeline? 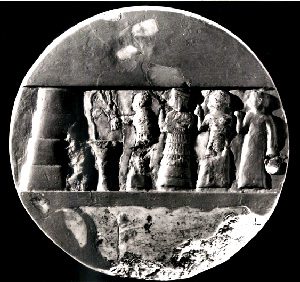 Enheduanna (2285-2250 BCE) was a Sumerian poet who wrote wrote 2 long poems in honor of the goddess Inanna in cuneiform 4,300 years ago. Read more on The Timeline>>

The Timeline Project is seeking authors who self-identify as women to create more essays about women poets. This women-only framework is designed to underscore collaboration over time between sister poets and scholars.

The essays are usually twelve to fifteen pages and are written for a general audience.  They include a photo of the poet, as well as useful markers like birth and death dates, birthplace, languages, forms, and subjects. Each essay includes a biography in its first half, followed by an overview of the work.  Samples of the poet’s writing are included at the end of the essay.  The essay must be original for the Timeline Project – even if the essayist has written about the chosen woman poet before,

Essays for The Timeline Project may be developed in through a Mezzo Cammin workshop or independently.

One way to develop an essay is by taking the Mezzo Cammin Women Poets Timeline Seminar, a three-day workshop run by Anna M. Evans, the timeline’s essays coordinator, as part of Poetry by the Sea: A Global Conference, which is held annually in May in Madison, Connecticut.  During that six-hour seminar – two hours each afternoon over three days and literally by the sea – it is possible to have community with other women essayists and to see other essays-in-process.

If you would like to write an essay on a woman poet without being in the seminar, please contact the Timeline Project’s editors, Kim Bridgford at kbridgford@yahoo.com or Anna M. Evans at evnsanna@comcast.net,  to find out if anyone else is already working on the poet you are interested in.  The essay poets are chosen well in advance, and many essays are currently in production.  It will also be helpful for the editors if you send them information about your level of scholarly experience in your inquiry letter.

The Future of the Timeline

At the beginning of the project, the editors were often asked, “What will you do when you run out of women poets?”  In the popular imagination, there are not that many women poets, and that is exactly the misconception The Mezzo Cammin Women Poets Timeline Project is addressing. 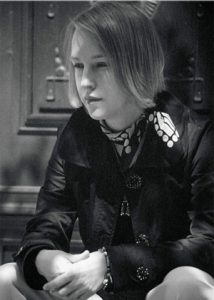 A.E. Stallings, born in 1968, is known as the best New Formalist poet of her generation. Read more on the Timeline>> (Photo: John Psaropoulos)

As the project has grown, the question has moved to the opposite end of the spectrum:  Is it possible to finish this endeavor in anyone’s lifetime?   The answer is no, since the project includes women poets from all over the world, from Enheduanna to A. E. Stallings.  New women poets keep joining the march of history, just as many new feminists joined the Women’s March on Washington.

While there have been many benefits to this project, perhaps the most important one has been to see the arc of ambition throughout the centuries.  No matter what other responsibilities each woman may have had, and often against all odds, she has created work that is lasting, and, even sweeter, re-discovered and re-claimed by another woman establishing her own name and honoring the long legacy of women’s writing. 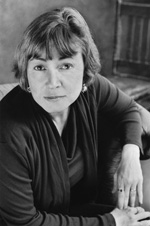 Kim Bridgford is the director of Poetry by the Sea:  A Global Conference in Madison, Connecticut, the curator of the Poetry by the Sea Reading Series at the Pennsylvania Academy of the Fine Arts, and the artistic director of a music and poetry series at 30th Street Station in Center City, Philadelphia.

Bridgford is the editor of Mezzo Cammin, an online formalist journal by women, and the founder of The Mezzo Cammin Women Poets Timeline Project, a comprehensive database of women poets.

The author of nine books of poetry, including the recent Human Interest, she is the recipient of grants from the NEA and the Ucross Foundation.  She and her collaborative partner, visual artist Jo Yarrington, are completing a three-book series, The Falling Edge, on Iceland, Venezuela, and Bhutan, and their new project, The Rotating Axis, is taking them to Antarctica, the Seychelles, and Greenland.  With Russell Goings, she rang the closing bell of the New York Stock Exchange in honor of The Children of Children Keep Coming, for which she wrote the introduction.  Bridgford is known as “America’s First Lady of Form.”