“I am Appalachia. In my veins
Runs fierce mountain pride; the hill-fed streams
Of passion; and stranger, you don’t know me!”
– from Appalachia by Muriel Miller Dressler (West Virginia,1970) 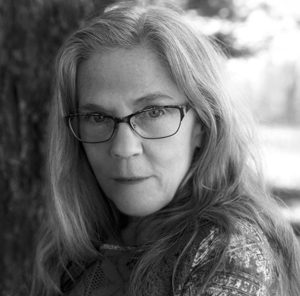 Appalachia is one of the most beautiful regions of the United States spanning 205,000-square-miles along the spine of the Appalachian Mountains from southern New York to northern Mississippi.  Although the mountains are rich in coal and other natural resources, there has been a long history of exploitation which has created some of the worst poverty in the country. The mountains have often kept Appalachia isolated from the rest of the United States, and many outsiders have developed negative stereotypes about the people who live there – often ridiculing them as “redneck,” “hillbilly,” or “inbred.”

In 2009 Kari Gunter-Seymour decided to challenge the negative stereotypes of Appalachian women by creating the Women of Appalachia Project. Her original intention was to create a one-time arts event, but she is now entering her ninth year of producing exhibits and performances that showcase and empower the women artists in this unique region.

Gunter-Seymour is a tiny woman with a big passion for writing and art and an infectious energy. She is a writer, a photographer, an organizer, a leader, a wife, and a military mom. She holds a B.F.A. in graphic design and an M.A. in commercial photography. She is an instructor in the School of Journalism at Ohio University. She has lived in Appalachia her entire life. 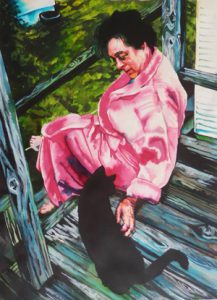 “Friend”- India ink on paper by Keri Dodds was featured in the 2013 Women of Appalachia exhibit.

“If you are from Appalachia, you grow to realize early on, that many people have an image of an Appalachian woman, and they look down on her,” Gunter-Seymour said.

She wanted to address this discrimination by encouraging women artists of diverse backgrounds, ages and experiences to come together and create work that celebrated the full range of their experiences as Appalachian women. She knew that her community in southeastern Ohio “was a rich basin of extraordinary art,” but many of her fellow artists were submitting their work and not gaining acceptance.  She wanted to create a safe environment that would encourage all kinds of Appalachian women artists, both emerging and established, to express themselves fully.

Through an initial partnership with the Multicultural Center Art Gallery at Ohio University, Gunter-Seymour created an exhibit featuring nine local women, five fine artists and four spoken word artists, and The Women of Appalachia Project was born. It has grown a lot since then.  In the second year, all women in southeast Ohio were invited to submit work. In her current call for art, any woman who has ever lived in any of the 420 Appalachian counties is invited to apply.  She organizes a Women of Appalachia art exhibit every year that travels to several venues, as well as five to seven Women Speak events hosted throughout Ohio and West Virginia that feature spoken word artists, musicians, and other performers. 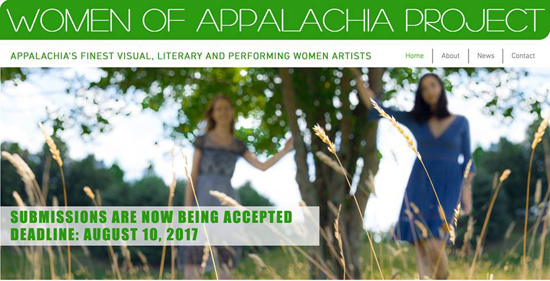 Submissions are now being accepted for the next Women of Appalachia art exhibits and Women Speak performances. Deadline: August 10, 2017.  More info>>

Writers and artists in the Women of Appalachia Project are from all occupations and lifestyles and hail from venues in Mountain South including Kentucky, West Virginia and Ohio.  Over the years the artists have ranged from women in their 20’s to women in their 70’s, and the exhibits have featured photography, sculpture, jewelry, and textile work as well as paintings.

Gunter-Seymour has also invited community groups to participate. In 2010 members of the Sisters in Recovery Collective from the Rural Women’s Health Recovery Program submitted quilts about the pain, strength, isolation and courage of women in recovery, which Gunter-Seymour described as “devastating and beautiful.”  The next year the Sisters in Recovery submitted the t-shirts they created as part of the Clothesline Project to help heal the violence of sexual abuse and domestic violence. 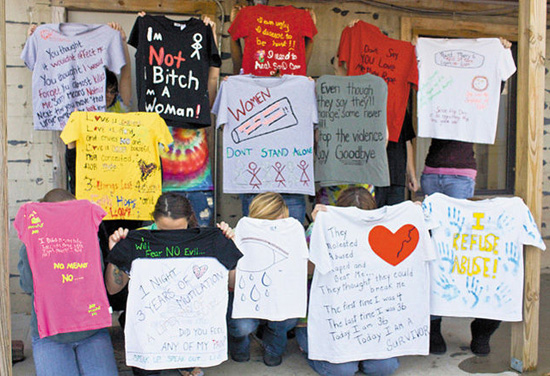 Sisters in Recovery T-Shirts about domestic violence and sexual abuse were displayed at the 2011 Women of Appalachia art exhibit. The women agreed to be photographed with their shirts, as long as their faces were hidden.  (Photo: Kari Gunter-Seymour)

“The Women of Appalachia events showcase the way in which female artists respond to this region as a source of inspiration.” says Gunter-Seymour.  Many of the artists are inspired by the nature that surrounds them, especially since 42% of Appalachians live in rural communities.

Trisha Lachman is a good example.  When asked about the inspiration for her poetry, she said, “When I walk outside at night, I hear the rustling pine woods behind my house, hear the screech owl calls warbling through the silence of the night, see the glittering stars of heaven peep through the waving tree branches.”

Many participants have gone on to win awards for their fine art pieces and have had their spoken word art published in national journals.  Gunter-Seymour has won awards herself and says she is “thrilled” at the successes of her sister artists.

Click on the audio player above to hear Kari Gunter-Seymour read her short poem about “Buzz White Dog.” The poem starts, “Unlike your ex-husband, Buzz never sought the favor of other women . . .”

Poet Cathy Cultice Lentes is also proud of the Project and its ability to bring Appalachian women together through artistic expression. She was a spectator at the inaugural event of the Project and was “blown away by the work of the writers.” Since then, Lentes has taken part in the Women of Appalachia Project as an artist and as a juror.

As a  transplant to Appalachia who has lived on a 60-acre farm in Meigs County, Ohio since 1987, Lentes feels she is still a newcomer after 30 years.  She says, “I am an Appalachian woman by choice, not birth. I still feel uncomfortable wearing that banner as ‘my people’ are from elsewhere,”

Lentes  works in public education as a teacher and psychology team member. She sums up the feelings of many of her sister artists in these events, “Though creative writing is not how I earn my keep, it is the thing that makes me who I am, and the thing I most long to do, and do well.”

For Gunter-Seymour, founding and curating the Women of Appalachia Project has made her “a much more fulfilled human being.”  As she says, “The growth has been truly incredible, with three fine art venues and six spoken word events, throughout Ohio and West Virginia over the first eight years.  Add a few hundred exceptionally talented women who have chosen to take this amazing ‘ride’ with me, along with a plethora of volunteers, male and female. Grateful, grateful!”

Kari Gunter-Seymour’s poem Serving won first place in the National Federation of State Poetry Societies‘ 2017 BlackBerryPeach Spoken and Heard Competition last month.   The poem is a moving account of a mother’s interactions with her son while he is on active duty in the military. The full poem is available online in the Winter 2017 issue of Still: The Journal>>

In a November 2016 interview with the Gyroscope Review, she explained why military service is a significant part of Appalachian life:

“My work as a whole is based on Appalachian culture. Unshakable patriotism and a willingness to fight for God and country have been a point of honor and pride for Appalachians for generations. Poverty is also a factor for ‘joining up.’ With limited access to higher education, and never enough jobs to go around, many Appalachians have found very few alternatives to military service. To a teen, the probability of being killed in war seems less gruesome than being killed in a coal mine, or worse yet being stuck forever in a dead end town. If you live in Appalachia, chances are you know a soldier and his/her family. ”

For more information about the Women of Appalachia Project, please visit their website and their Facebook page.

Goals of the Women of Appalachia Project:

We believe that all women are capable, courageous, creative and inspired.
We tell our stories through our art. 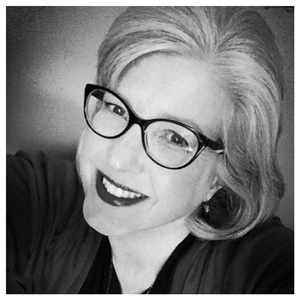 Sarah Diamond Burroway is a writer and theatre artist who lives in Flatwoods, Kentucky. Sarah’s writing is included in the Women of Appalachia Project “Women Speak” (2014-2016). Her essays and poetry are published in The Bitter Southerner’s Folklore Project, Still: The Journal and The Worcester Journal.

Sarah’s plays and monologues have been produced in New York, California, West Virginia, Ohio and Kentucky. She is currently pursuing her Master of Fine Art in Writing at Eastern Kentucky University’s Bluegrass Writers Studio. She is Director of External Relations at Ohio University-Southern in Ironton, Ohio.