Many women in Hollywood have a hard time getting work, but women composers have it harder than most. According to Martha Lauzen’s Celluloid Ceiling Report on the 250 top-grossing domestic films of 2016, women were 13% of the writers, 7% of the directors, 5% of the cinematographers, and only 3% of the composers. 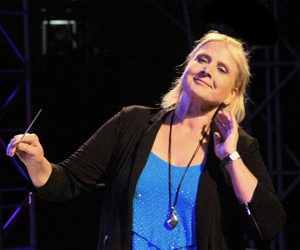 The Alliance for Women Film Composers was created in 2014 to address this problem. They argue that there are many women composers working on music for films, television programs, and video games, but they are in low-visibility jobs. They are not being hired for high-profile jobs, because most film professionals are not aware of their existence.

This lack of awareness is so strong that when Lesley Barber, the composer for the Oscar-nominated film Manchester By The Sea, showed up for an interview about the movie, she was assumed to be the publicity person for the composer, not the composer.

Founded by three award-winning composers, Laura Karpman, Miriam Cutler, and Lolita Ritmanis, The Alliance for Women Film Composers is tackling this visibility problem head-on. They are working with the media, the music community, film studios, and film festivals, as well as individual men and women in the field to raise awareness and increase the inclusion of women composers.

Online Directory, Presentations & Press – They established an online directory in 2015 which now has profiles of over 180 women composers from around the world. They have also worked to get women composers on panels at the Cannes International Film Festival, Sundance, and other major film festivals and conferences. This has resulted in more coverage for women composers in Billboard, The Hollywood Reporter, Variety, and other trade magazines.

The Women Who Score Concert – Their most spectacular success so far has been The Women Who Score: Soundtracks Live, an outdoor concert in August 2016 curated by Laura Karpman that featured the works of 21 women composers of film, television, and video game music performed by a 55-piece orchestra and 30-voice chorus. 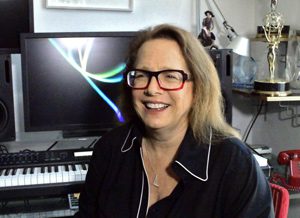 The Alliance for Women Film Composers and Grand Performances, in association with The Film Music Society and White Bear PR, organized the magnificent performance.  Over 1,500 people, including many agents and industry executives, filled the Grand Performances California Plaza in downtown Los Angeles.

Music from a wide range of projects was performed, including The Cider House Rules, In The Heat Of The Night, Kung Fu Panda 3, Bones, The Hunting Ground, and Nurse Jackie. Many of the composers conducted or performed their own soundtracks.

The concert was dedicated to film composer Shirley Walker (1945-2006), one of the first female composers to earn a solo score credit on a major Hollywood motion picture for her work on John Carpenter’s Memoirs of an Invisible Man (1992).  At the time of her death, Walker had scored more major-studio motion pictures than any other American woman. She won Emmy Awards for her work on Batman: The Animated Series and Batman Beyond.

Shirley Walker won an Emmy for the music in the clip above from Batman: The Animated Series.

Laura Karpman, the first president, is a four-time Emmy Award winner who has scored feature films, television and video games along with writing for theater and concerts. She was recently elected to the music branch of the Board of Governors for the Academy for Motion Picture Arts and Sciences, where she will be in a powerful position to advocate for women composers.

Goals for the Future

The new president, Emmy Award-winning composer Lolita Ritmanis, says the organization has a lot of goals for the coming year.  She is excited that studio executives, producers, and directors have started using the Alliance’s online directory to look for composers and sometimes to recommend composers to audition for projects.

“This creates a responsibility for the Alliance,” she states, “that executives seeking new talent find people with the proper experience they need. For those composers fresh out of school, no matter how great the programs they’ve graduated from, there are gaps in their knowledge.  The Alliance for Women Composers gives them real-world experience, mentoring, a sounding board — a safe space to ask questions.”

She explains that through their networking meetings and other gatherings, Alliance members can get advice about how much time they should spend working for an established composer, how to avoid dead-end jobs, and how to pursue independent films and other credits that will help them build their careers.  Sometimes younger women need a push to be more vocal about asking for opportunities. Ritmanis notes, “It’s always inspiring to be in the presence of highly professional people to see how they navigate certain situations.”

She reports that at the Sundance Film Festival brunch this year, the Alliance had amazing support — from male colleagues, agencies, public relations firms and some directors and producers.  “There was excitement in understanding that it’s not about complaining that women aren’t getting work.  It’s really about offering women a seat at the table, and empowering women to ask for a seat.  Excluding women from consideration needs to change, and is changing.”

Read more about The Alliance for Women Composers on their website>>

About the Author – Adryan Russ

Adryan Russ is a lyricist/composer for theater, film, TV, concerts, and recordings.  She’s a member of ASCAP, the AWFC and sits on the board of The Society of Composers & Lyricists.