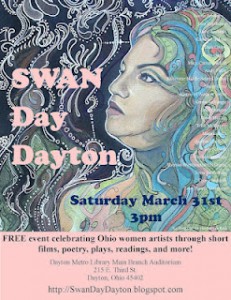 This Saturday, March 31st, 2012, the Dayton, OH community will have the opportunity to celebrate the talent of a diverse group of women artists (and some of their male collaborators) who span several generations. Produced by playwright Stacy Lane and co-produced by filmmakers Dara Cosby and Alex Mangen, SWAN Day Dayton, which will take place at the Auditorium in the Dayton Metro Library Main Branch (215 E. Third St.) beginning at 3pm, will feature short film screenings, performances of several short plays, exhibits by painters, readings by published authors, and live music.

One of the most exciting aspects of the Dayton showcase is its inclusion of very young participants. The youngest is Kristina Cardoza, who, at age 10, is the author of the children’s book Pinky Bunny’s First Day of Kindergarten. Students from Kilbourne Middle School and Thomas Worthington High School will perform the plays Gossip Squirrels, Pulse, and Stalemate under the direction of their teacher, Andy Falter. Art students Tessa Trozzolillo (Free As the Wind), Maggie Price (A Pretty Piece of Flesh), and Coco Gagnet (Cover Girl) will each screen shorts they directed.

The producers have made some great curatorial choices to integrate the meta-themes of childhood and growing up throughout the program. Nicole Simmons’ short film Sunday Spin is about a 13-year-old girl’s first encounter with love, and Djuna Wahlrab’s short Falling Up is about a man who magically goes back to experience moments from his childhood in order to reconnect with his true self. This focus on children and their experiences seems natural; The Zoot Theatre Company, which will perform Stacy Lane’s short play Lucy Dreaming, regularly works with children and adolescents through their educational outreach programs, and Lane has previously worked with some of the children who will be appearing on Saturday.

The themes of growth and personal development are echoed in the work of the authors who will give readings. Mary Curran Hackett, an English professor at the University of Cincinnati, will read from her first novel, Proof of Heaven, which is about a little boy living with a chronic health condition that leads both him and his mother on spiritual journeys. Tami Boehmer will read from her book, From Incurable to Incredible, which tells the stories of people – including herself – who have survived cancer against discouraging odds. Sara Berelsman will read from her memoir-in-progress about alcoholism, The Last Rock Bottom. The choice of three authors who deal in different ways with medical conditions and the opportunities they afford individuals for self-discovery will undoubtedly bring a nice sense of coherence to the readings. Nicole Amsler, who writes about “Midwestern dysfunction,” Joy Schwab, a feminist poet, and Kristie LeVangie, who writes erotic poetry, round out the group of readers.

To top off the entertainment, jazz vocalist Patricia Berg will sing songs from her latest CD release, Sweet Sorrow.

In addition to the performances, paintings by Trish McKinney, Dawn McCoy, and Heather Lea Reid will be exhibited, and the Dayton chapter of The League of Women Voters – one of the first in the nation – will be present to inspire women to vote for candidates who represent their interests. And one can hope that the afternoon will also include a screening of co-producer Alex Mangen’s hilarious short film, Soothing Nature Day Spa.

Artists and audience members of all ages are sure to be inspired by the vast display of local talent at SWAN Day Dayton. WomenArts would like to congratulate the Dayton producers and artists for putting together such an ambitious and intriguing SWAN celebration – may it be their first of many!