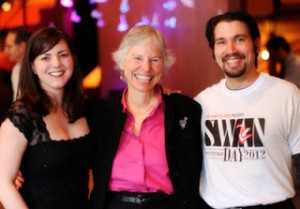 On Thursday, March 15 and Friday, March 16, Tressa Glover and Don DiGiulio of the No Name Players presented SWAN Day Pittsburgh. I attended the Thursday night performance and I was completely blown away by the talent of the participants and the overall concept and execution of the production.

SWAN Day Pittsburgh is unique because all of the participating artists are asked to create new works in response to videotaped interviews of women from Pennsylvania. This year Glover and DiGiulio interviewed women from all over the state at the Pennsylvania Conference on Women as well as women in their home town of Pittsburgh, and then distributed the videos to local musicians, dancers, and theater artists.

The women who were interviewed discussed a wide range of topics – some talked about their careers, some talked about overcoming fear or finding inner strength, one woman discussed her feelings about a friend who would not leave an abusive relationship, and another talked about the challenge of learning that her son had stage four cancer. The videos were shown as a pre-show event, and it was inspiring to see the thoughtfulness, courage and tenacity that these women demonstrate in their everyday lives. The mainstream media tends to ignore these women, and it was wonderful to contemplate this world of ordinary women who do extraordinary things every day.

Some of the artists used direct quotes from the videos as the basis for a scene, song, or dance, and others responded to the spirit or message of the women on screen. During the main show, a few of the video clips were interspersed with the live performances so that the audience could see the connections between the women’s statements and the artists’ creations.

Even though I have been running WomenArts for seventeen years, I know that there will always be thousands of amazing women artists that I have never met, and SWAN Day Pittsburgh offered so many new discoveries in one evening.  There were 14 acts and 72 people listed in the program.  It was an extraordinary display of talent, and there was a wonderful warm sense of community among the artists and the audience.

It is hard to single out particular artists, since I enjoyed all of them, but I was especially moved by the songs performed by Deana Muro, Erika May, and Betsy Lawrence. Award-winning poet Toi Derricotte read a piece that she had written that morning because she felt so inspired after the tech rehearsal. I was thrilled to meet Toi Derricotte because I have long admired both her poetry and her work as the founder of Cave Canem, a non-profit dedicated to cultivating the artistic and professional growth of African-American poets.

The evening included three great short plays – Zero Mile Mark by Carol Mullen about three women who discover their inner strength on a challenging hike, Mom’s Kitchen by Robin Walsh about two sisters coping with their mother’s death, and Bugaboo by Virginia Wall Gruenert, a very funny piece about  women struggling to overcome their fears through group therapy.

There was a visual art display in the lobby and a wonderful fire dance performed outdoors by Steel Town Fire during the intermission. During the second half of the show, I especially loved From Me to You, a dance piece choreographed by Maria Caruso and exquisitely performed by Elizabeth Praedin.  Caruso is the founder of Bodiography Contemporary Ballet, a company created to provide performance opportunities for ballet dancers with healthy, athletic, but non-stereotypical ballet bodies.

SWAN Day Pittsburgh is an official WomenArts SWAN Partner this year, and producers Tressa Glover and Don DiGiulio have really captured the essence of SWAN Day. Their event was artistically ambitious, women’s perspectives were at the core of all of the art, and it was clear that their SWAN events are really building a sense of solidarity among the artists in their community.

It takes a generous heart and a huge amount of work to organize an event like this that showcases so many artists in so many disciplines. It was clear that Tressa Glover and Don DiGiulio had selected the artists carefully and then worked hard to create an environment where the artists felt supported to stretch and develop new works. Congratulations to the two of them for producing this event with so much grace and skill, and thanks to all the artists for their excellent work.