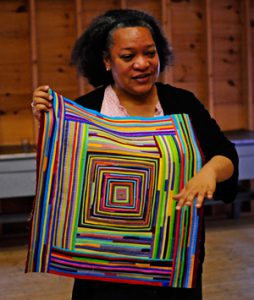 Chawne Kimber displays a sample of her work at a Slow Stitching Retreat (Photo: Kristin Shields)

Chawne Kimber is making some of the most powerful artworks today about race, language, women’s rights, and police brutality—all with a needle and thread. Kimber tackles these issues with provocative art quilts and colorful embroideries, all hand-pieced and stitched in painstaking detail.

Kimber has become a celebrity in the quilting world because of her political themes and her incredible technical skill. For instance, her piece based on the last words of Eric Garner, The One for Eric (2015), won first place in Improvisational Piecing at QuiltCon West, one of the largest modern quilt shows in the world, and was featured on the front page of the L.A. Times.

In that quilt Kimber sewed the phrase “I can’t breathe,” over and over in white text that slowly fades to blue against a textured black and red background. 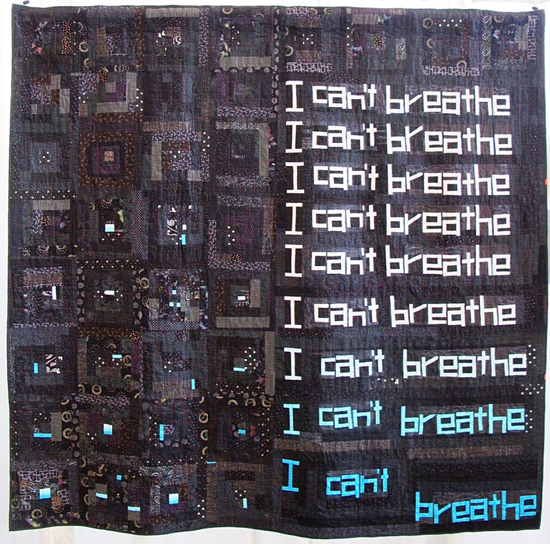 Kimber has said:  “The improvisational patchwork here is meant to remind one of graffiti scrawled impulsively on a wall in the shadows. Hand-quilting in winding trails of various reds invokes brick and blood…this one is for Eric Garner who was killed in a chokehold by NYPD officer Daniel Pantaleo on July 17, 2014 on Staten Island. His suspected crime was selling loose cigarettes on a street corner. Recorded in a viral video on a smart phone, these were Eric’s last words. For me, these words are filled with meaning beyond the incident.” 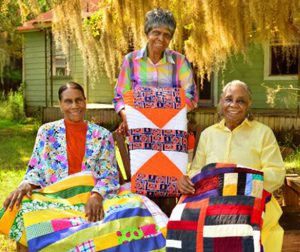 Although quilts are made of soft cloth and are considered a female art form, they have often been used to convey political messages. American women in the early 19th and 20th centuries used quilts to communicate messages about abolition, temperance, suffrage, and women’s roles in politics in an age when they had few other outlets for speaking out in the world. There is also a long history of African-American women quilters, such as the women of Gee’s Bend, Alabama, who have been making quilts since the 19th century.

In more recent decades, the famous AIDS Memorial Quilt, the contemporary “craftivist” movement, and textile artists such as Kimber have continued the tradition of politically and socially engaged quilting and sewing. 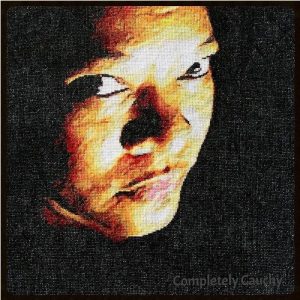 Kimber, a math professor who has a popular quilting blog called Completely Cauchy, has explored a variety of controversial issues in her quilts. In 2011 and 2012, she produced a number of quilts reflecting on First Amendment rights that prominently featured profane words spelled out in patchwork blocks.

One of these, Lenny (2011), is an homage to comedians Lenny Bruce and George Carlin. The quilt features Carlin’s “heavy seven” profanities which were banned from TV and radio. Although the words are heard and seen now on cable TV and the Internet, Bruce was arrested repeatedly for using them in live performances in the 1960s.  A radio broadcast of Carlin using them led to a landmark Supreme Court case about the power of the Federal Communications Commission to regulate “indecent” speech in 1978. The words are still rarely heard on broadcast television or radio.  (If you wish to see Kimber’s Lenny quilt, click here.) 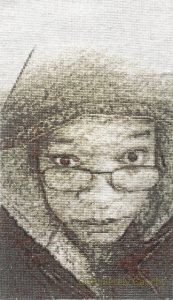 When working with themes of race and violence, Kimber often turns not just to words but to self-portraiture to make her statements. Kimber has created a series of self-portraits in both quilting and cross-stitch—the most recent of which consisted of 22,176 individual stitches—which feature intense close-ups of the artist’s face often focused on her glasses, nose, or curly hair.

In Self-Study #4 : The one for T (2013), Kimber has quilted four two-color images of herself in which she is posing in a hoodie reminiscent of the one worn by Trayvon Martin when he was killed.

Text, self-portraiture, and traditional patchwork quilting all come together in the 2015 quilt Cotton Sophisticate, which features a colorful background of improvised patchwork squares above the phrase, “In essence, I am a sophisticated cotton picker.” The line, taken from Eartha Kitt’s autobiography Alone with Me, refers to the fact that some of Kimber’s ancestors were slaves who worked in the cotton fields of Alabama. Kimber comes from a long line of quilters, and the traditional quilting styles used in the piece are inspired by their accomplishments. 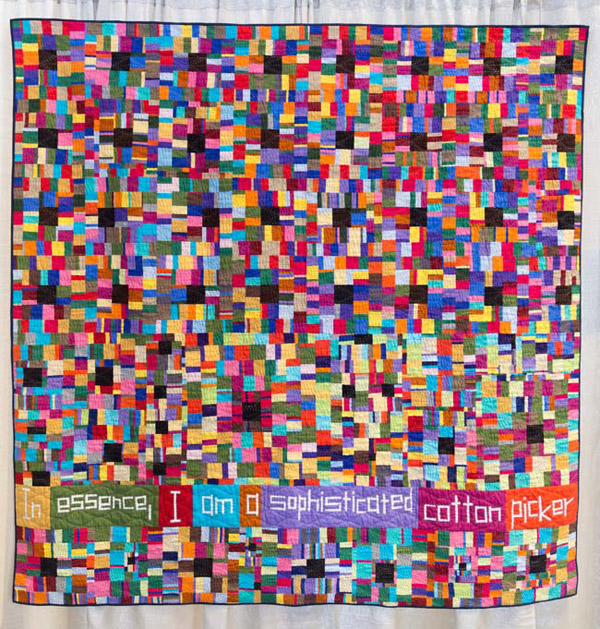 And that might just be one of the most compelling things about Kimber and her quilts, which are now moving beyond the quilt world and into a wider public eye. Even when her quilts are joyful and bright, stitched together in intricate patchwork blocks and draped across a bed, Kimber cannot escape the fact that the very fabric she works with is so directly connected to the racial violence and inequality embedded not just within our country’s history, but in her own family’s.

On her blog, Kimber often writes about the power that we give to or take away from language. We can give or take power from quilts, too, and more often than not we have dismissed them as feminine, domestic items with little to say. Kimber is taking back that power, one stitch at a time.

-For the history of quilting in America and a digital archive of important quilts, the best resource is the International Quilt Study Center’s World Quilts: The American Story http://worldquilts.quiltstudy.org/americanstory/

-The Michigan State University Museum has the Great Lakes Quilt Study Center, which includes a large collection of African-American quilts. There’s some information and an online gallery at http://www.museum.msu.edu/glqc/collections_special_aa.html

-For more information about contemporary quilting, including galleries of very recent modern quilts and expos, and information on how new or aspiring quilters can get involved, visit The Modern Quilt Guild https://www.themodernquiltguild.com/

-For more information on “craftivism,” visit the blog and writings of Betsey Greer, who coined the term and provides a definition on her site http://craftivism.com/definition/ 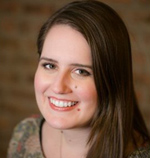 Maria Hlohowskyj is a Chicago-based writer and arts administrator with a Masters in Writing & Publishing from DePaul University. She is also a fiber artist who teaches crochet and has studied knitting, quilting, and felting around the world. Her main interests in the art world are works that use textiles, decorative arts, and mixed media to explore feminist issues, language and literature, and the intersection of humans and nature.