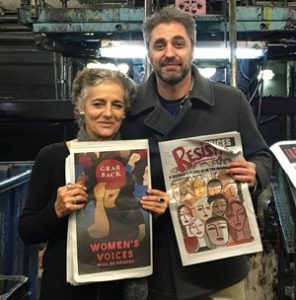 Many men as well as women were disturbed by the sexism expressed during the recent presidential campaign. Gabe Fowler, the intrepid owner of New York’s comic book store and publisher, Desert Island, was one of them.  He decided to respond to the misogyny he had seen by creating a comic book featuring women artists.

Thanks to Fowler, two brilliant female editors, and cartoonists around the world, over 58,000 free copies of RESIST!, a 40-page newspaper of political cartoons mainly by female artists, will be distributed this week at the presidential inauguration and at the women’s marches in Washington, D.C. and elsewhere.

Fowler wanted the paper “to have a strong and powerful roar of female voices without the meddling by men.”  He knew that as a man, he should not be the one leading the charge. Although Fowler edits the quarterly comics anthology, Smoke Signal, he tapped Françoise Mouly, the well-known cartoon editor of The New Yorker, to bring this special women’s issue to ink and page as the editor. 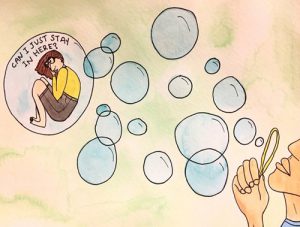 By Annah Feinberg from RESIST! 2016

Françoise Mouly is a busy woman. The publisher of TOON Books, and an author herself, Mouly is often approached to do comic projects, but more often than not, has to turn them down.  In order to say yes to Fowler, she signed on her daughter, writer Nadja Spiegelman to co-edit the issue with her. In a recent interview, Spiegelman said that her mother, like many women, is overloaded with work, and after the elections results, was in a sort of state of paralysis.

Yet, Spiegelman affectionately said that doesn’t stop someone like her mother.  “It’s exactly the kind of thing she wanted to do,” Spiegelman said.  “There is no difference between paralysis and running for her.” 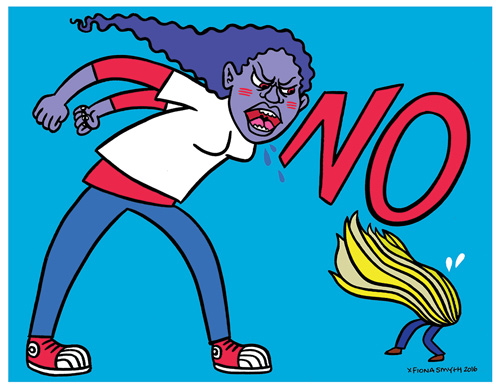 In order to get a critical mass of submissions from around the country that would represent different cultures, backgrounds and experiences, Mouly and Spiegelman put an open call out for submissions in late November. Submissions were received via the website RESIST!  They also wrote to some of their favorite artists asking them to submit to the project.

Within hours the RESIST! website became the place where women artists, amateur and professional, left their responses — whether they were angry, sad, uplifting, numb or otherwise — about the state of things and about moving forward.

“We wanted to have as many different voices as possible,” Spiegelman said about the submission process.  “We wanted to shape it to the work we received, and had no preconceived notion of what a paper called RESIST! should look like. It would limit us if we did.”

A few noteworthy names who will be a part of the project include comic artist Alison Bechdel, of Fun Home fame, longtime artist Lynda Barry, and New Yorker cartoonist Roz Chast. 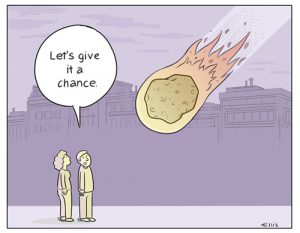 Some notable male cartoonists are also included, such as Mouly’s husband and Spiegelman’s father, Art Spiegelman, who is best known for Maus, a Pulitzer Prize-winning graphic novel about his father’s recollections of the Holocaust.

Submissions by women and gender-fluid artists will make up the majority of the issue, which is very unusual in the male-dominated world of comics.  (See the Additional Resources below for articles about the lack of gender parity in comics.)

Gender Makes a “Stark Difference” in the Cartoon Content

Spiegelman said that while looking through submissions she couldn’t say whether or not a particular image was created by a man, a woman, or a gender-nonconforming person, but she noticed a “stark difference” when the cartoons were sorted by gender during the selection process.

Most of the submissions by men were caricatures of Trump, while submissions by women and gender-fluid individuals involved images of women’s bodies, comic strips about the day after the election, and moving pieces about the feelings the artists were having. 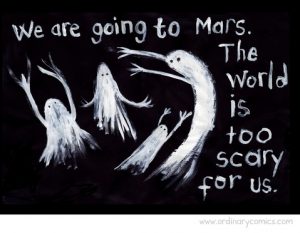 Spiegelman said they received over 1,000 submissions. Some of those images can be seen on the RESIST! website now, and Spiegelman said that they will continue to post new work on the website after the inauguration to keep the momentum going.

Fowler’s quarterly editions of Smoke Signal generally run about 10,000 copies, but they have printed 58,000 copies of the women’s anthology to distribute nationwide for free. As of January 16, all of the issues had been sent out to local distributors.  You can find distributors near you on the RESIST! website. They are looking for volunteers to help hand out the comics. If you would like to help, you can sign up through their website.

To print RESIST!, the team raised $9,000 from people willing to pay for their issues—at $10 a pop—from online ordering.  Spiegelman said there were also a few other donors, and that the amount raised would be adequate to get the issues in bookshops and street corners.

While there is discussion about a possible RESIST! 2 and RESIST! 3 in the future, Spiegelman said the first step is getting the inaugural issue out at the right moment.

“It’s about creating something solid, the world as we want it to be,” Spiegelman said. “It’s easy to unite people against something.  .  . It’s more difficult to bring people together for something. Resist! was born out of a collective need to do something. It’s amazing how many people picked up pens.”

If you Google “sexism in comics,” you will find lots of articles on the topic.  Here are a few to get you started:

Trina Robbins has been writing about women in comics for over 30 years. She has several books about the history of women in comics that you can find in online bookstores or on her website.  We especially recommend: 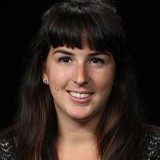