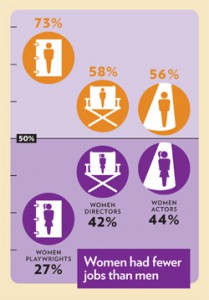 QUESTION:
What’s the overall picture?  How much work is there for women and men in San Francisco/Bay Area theatre?

FINDING:
In the 500 shows counted, women had fewer jobs than men in every category.