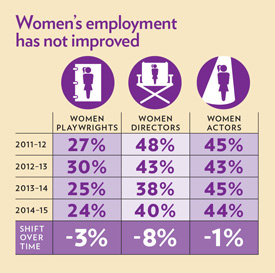 QUESTION:
Have the employment numbers for women changed over time?

FINDING:
Between 2011-2014, there was no significant improvement in women’s employment in San Francisco/Bay Area theatre.

During this time, women union actors made very slight gains, moving up six points, from 38% to 44% and women non-union actors wobbled their way down four points from 48% to 44%.  The proportions for women directors dropped and then rebounded slightly, traveling from 48% down to 38% then up to 40% for a net loss of eight points.  The women playwrights numbers have dropped as well, accounting for only one quarter of the shows produced in the last eighteen months of the study.

Gender parity requires continued attention and energy on many fronts in order for us to reach equal representation for playwrights, directors and both union and non-union actors.

TABLE 2 – Women’s Employment Has Not Improved