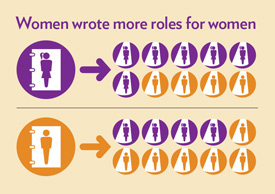 Both women and men write shows that skew towards a roughly 60/40 split favoring their gender.  This suggests that the imbalance in roles for women could be corrected simply by producing more work written by female playwrights.

However, another noteworthy trend is that the average cast size for female playwrights is 5.6 actors, while the average cast size for male playwrights is 8.2 actors.  Since women are better represented in the field of contemporary plays than classics, and since newer plays tend to have smaller casts, plays in this study written by women tended to be smaller cast plays.  Thus, we cannot assume that producing more plays by contemporary women will be enough to solve the problem of fewer roles for women.

There remains work to be done in the new play sector to move our stages closer to gender parity.  But we can not only rely on new plays.  We must also rediscover classic and modern plays written by women, and produce those as well.