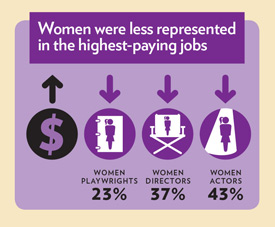 QUESTION:
How does contract type/budget size affect the gender ratios?

FINDING:
Women were less represented in the highest-paying jobs.

While I didn’t have access to exact budget information for Bay Area theatre companies, I was able to consider the type of Actors’ Equity contract used to produce each show. Contract types define how much artists are compensated for the work they do.  While Actors’ Equity is the union for stage actors and stage managers, often compensation for playwrights and directors falls in line with what actors are making.  Actors’ Equity productions at the highest level usually have the largest budgets and are produced by the most high profile companies in the region.  Thus, analyzing shows by contract type correlates to looking at the budget size of producing theatres.

For the purposes of this study, I divided shows into three contract categories:

Additional details about these and other union codes and contracts are available on the Actors’ Equity website (www.actorsequity.org) in the ‘Document Library’.

In dividing the 500 shows counted into the three contract categories described above, the following trends emerged:

The drop in women’s participation at the highest level of the compensation ladder points to a “glass proscenium” in our region’s theatres, especially for playwrights, directors, and union actors.  To break through this barrier, theatres at every level, but particularly those that offer Equity contracts with health weeks, must look for opportunities to employ more women.

TABLE 3 – Women Were Less Represented in the Highest-Paying Jobs