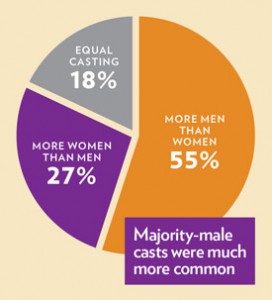 QUESTION:
How often do plays have more than 50% roles for one gender?

Only 18% of shows had equal roles for women and men. Men were more than twice as likely to write these shows, and women and men directed them in roughly equal numbers.  Union women were slightly less likely than union men to be employed on these shows, and non-union women were slightly more likely than non-union men to be employed.