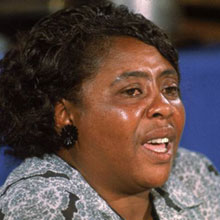 On April 4 and 5, 2014 WomenArts and the Mount Holyoke Symphony Orchestra presented the East Coast premiere of Dark River: The Fannie Lou Hamer Story, a full-length opera written and composed by Mary D. Watkins.  You can watch archival video clips from this production on the WomenArts YouTube channel.

The opera brings to life one of the most turbulent periods in American history. Fifty years ago, Fannie Lou Hamer was one of the first African-Americans to register to vote in Mississippi. She endured severe beatings, harassment, death threats, and imprisonment to secure voting rights for her people.

Ng Tian Hui, the Music Director of the Mount Holyoke Symphony Orchestra, said that he selected this work for two reasons: “The story of Fannie Lou Hamer’s struggle for the rights of African-Americans resonated with me as an Asian transplanted to the U.S. Her story speaks to anyone who has ever experienced discrimination or the feeling of being an outsider. Also, I love working with contemporary artists like Mary D. Watkins who are creating their own musical styles. Dark River is classical music that is infused with elements of jazz, gospel, and blues. It is a wonderful musical challenge for me and the performers.”

WomenArts Executive Director Martha Richards saw the original production in 2009 and wanted to bring it to larger audiences. She has been working with composer Mary D. Watkins since 2011 to develop the piece and find other venues.

Richards explains, “The voting rights that Fannie Lou Hamer and so many others fought and died for in the 1960s are in jeopardy once again. The younger generation needs to know about this inspiring chapter of American history. Also, this opera captures the particular challenges faced by women activists – Fannie Lou Hamer had to fight against sexism as well as racism throughout her life. The opera explores Fannie Lou Hamer’s decision to fight for her rights, her challenges, her triumphs, and the impact of her activism on her husband and children.”

WomenArts is currently working with Mary Watkins to find additional venues for this piece. We welcome inquiries from other professional companies or schools that are interested in producing “Dark River: The Fannie Lou Hamer Story”.

Trained in classical music at Howard University, Mary Watkins has written for symphony orchestras, chamber and jazz ensembles, film, theatre, and choral groups, in addition to being a popular recording artist for Olivia records in the 1970s. Watkins’ recent recordings include Prayer for Peace, a meditational CD, and Recorded Music of the African Diaspora (Albany Records, 2010: Center For Black Music Research; department of Columbia College in Chicago, IL). Read More>>

Known for his inter-disciplinary work, Ng Tian Hui has conducted orchestras in Singapore, the UK & the US. He has taught at Bryn Mawr College and Haverford College, and he is the current Music Director of the Orchestra at Mount Holyoke College. Read More>>

Director – Darryl V. Jones
Award-winning Director Darryl V. Jones has directed off-Broadway and at many leading regional theatres. He has taught at the University of Michigan and currently serves as Associate Professor of Theatre and head of the Musical Theatre Program at Cal State East Bay. Read More>>