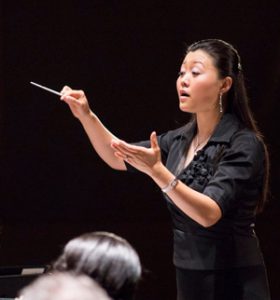 Hailing from China, Qiao Chen Solomon began playing violin at the age of 8 and later pursued the studies of viola, voice, piano, and conducting. Qiao performs as soloist, conductor, chamber musician, and orchestra player throughout the United States, Asia, and Europe.

She has performed at Carnegie Hall with the ARCO chamber orchestra, and with the same group she has performed and recorded “Vivaldi’s Violin Concertos” on the Art Classics Label as a featured soloist. Qiao recorded “Pulsar” by Augusta Read Thomas and the “Sonata for Viola and Piano” by Rebecca Clark for a double CD collection of works by women composers commissioned by the National Council of Women of the United States.

Qiao is an advocate of music by American women composers. Her recent recital programs feature compositions by Amy Beach, Ellen Taaffe Zwilich, and Jennifer Higdon. In March 2015 she gave the world premiere of the commissioned solo violin work “Capricious Toccata” by Augusta Read Thomas, during the composer’s residency at Agnes Scott College.

Qiao is an Assistant Professor of Music and Director of Orchestral and Strings Studies at Agnes Scott College. She teaches violin, viola, and conducts both the ASCCO and the Strings Chamber Ensemble.