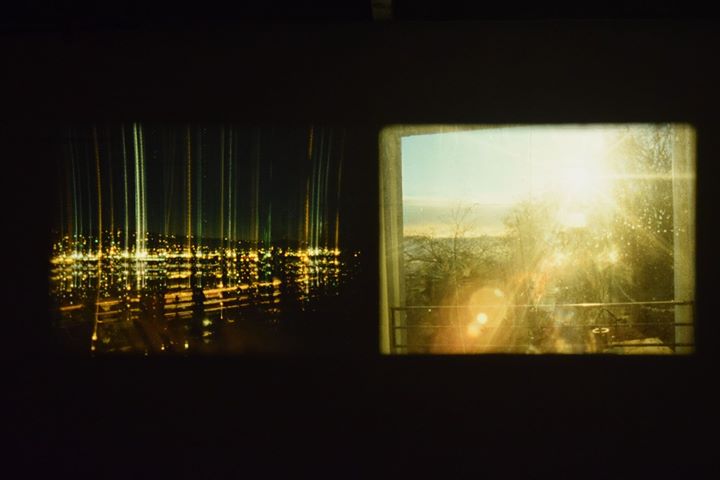 The second night of the Dallas Medianale includes audio-visual performances and the opening of an exhibition by Eve-Lauryn Little Shell LaFountain and a public art installation by Sean Miller at The MAC; and an exhibition by Ian Haig at Ro2 Art. The exhibitions will be on view through May 27.

Eve-Lauryn Little Shell LaFountain’s work investigates urban indigeneity, ceremony, tradition, landscape, spirits, light, and photographic mediums. Giizis Mooka’am (Sun/Moon Rise) is a 16mm film project made as part of LaFountain’s previous series, Waabanishimo (She Dances Till Daylight). The film, with sound by Jon Almaraz, is made in two parts – Giizis Mooka’am: Giiwe (Sun/Moon Rise: She Goes Home), and Giizis Mooka’am: Waabanishimo (Sun/Moon Rise: She Dances Till Daylight) – and will be shown as dual 16mm projections. The titles are in Ojibwa with English subtitles. These films bend time and collapse the space between the artist’s current home, Los Angeles, and former home, Santa Fe—the ghost world and the world of the living.

Opening concurrently at Ro2 Gallery, situated in the same complex as the MAC, will be an augmented reality installation by Australian artist Ian Haig (www.ianhaig.net).

For the opening night at the MAC there will be an impressive line-up of audio-visual performances by artists:

Eve-Lauryn Little Shell LaFountain is a Los Angeles-based multimedia artist from Santa Fe, New Mexico. LaFountain’s work investigates her mixed Jewish and Turtle Mountain Chippewa heritage, Feminism, ceremony, history, tradition, and photographic media in the contemporary world. Her films have shown in festivals and venues across the country and abroad, including Ga ni tha on the occasion of the 2015 Venice Biennale, ImagineNATIVE Film and Media Festival in Toronto, and the Smithsonian’s National Museum of the American Indian in New York. LaFountain’s photography has shown extensively and has won numerous awards, including the Ebner Trophy for International Excellence in Photography, and, in 2010 she was the first photographer to win the Santa Fe Indian Market Best of Classification award. Her first solo museum exhibit was mounted at the Museum of Contemporary Native Arts in the fall of 2015. LaFountain is a co-op member at the Echo Park Film Center, where she teaches 16mm film classes and curates screenings. She holds a BA from Hampshire College where she studied Experimental Film, Photography, and Native American Studies. In the spring of 2014 she received a dual MFA from the California Institute of the Arts in Photography/Media and Film/Video. She currently manages the film school equipment facilities and is teaching alternative photographic processes at CalArts.

Sean Miller is an artist working with video, sculpture, installation, live media, performance, and sound art. His work is a synthesis of media, which explores embodiment, dynamical systems, and synesthetic relationships. He is currently teaching New Media and Creative Computation at Southern Methodist University and the University of North Texas, where he received his Masters of Fine Arts in 2014.

Kristin Reeves has shown her interdisciplinary work internationally in museums, galleries, theaters, art events, and festivals such as the Museum of Contemporary Art Chicago, Microscope Gallery (Brooklyn), and was included in the 26th European Media Art Festival’s Best of the Festival program (Osnabrück). She has also collaborated in over 20 multimedia performances including the Tony Fitzpatrick American Trilogy and its epilogue, The Midnight City, at the Steppenwolf Garage Theater. Currently she is an Assistant Professor of Photo/Video/Intermedia Art at Ball State University where she can be found laser cutting 16mm film and managing her always-expanding projector collection. She earned her BFA in Fine Art Photography from Ball State University (2001) and her MFA in Art & Technology from the University of Florida (2012).

Kyle Evans (MFA, The School of the Art Institute of Chicago) is a sound designer, computer musician, electronic instrument creator, educator and performer. While his educational background was focused toward experimental music and sound art, his collective artistic work ranges from music technology development to multimedia installation. He has invented many electronic musical and video instruments ranging from studio-based synthesizers to performance-based computer interfaces and electronic augmentations to acoustic instruments. His performances and installations commonly explore the relation between modern and obsolete technologies, breaking and repurposing, and the dialogue between performer and technology. He has performed and presented his work throughout the United States and Europe including transmediale 2013 in Berlin, the 2010 International Computer Music Conference (ICMC) at Columbia University in New York, the 2012 Dallas Video Festival at the Dallas Museum of Art, Dimanche Rouge in Paris, the 2012 Vancouver New Music Festival, the 2011 Milwaukee Avenue Arts Festival in Chicago, and the 2011 & 2012 GLI.TC/H festivals in Chicago. He won second prize in the Guthman New Musical Instrument Competition 2012 at the Georgia Tech Center for Music Technology for his collaborative project Cracked Ray Tube. His work has been presented in several publications including Popular Science Magazine, Computer Music Magazine, Neural Magazine, and Hand Made Electronic Music by Nic Collins. He is currently an instructor of audio production and electronics in Austin, TX. (www.kyleellisevans.com)

Lucas Dimick (MFA, The School of the Art Institute of Chicago) is an artist, educator and animator. He works in a wide range of media from paint on canvas to hand-drawn and computer animation. Lucas’s animations have been screened at Marfa, The Big Muddy, Boston Underground and Chicago Underground Film Festivals. His twenty-three minute animated film, Prison_Beta won Best Animation at the 2008 Chicago Underground Film Festival. He is currently a professor of Media Arts and Animation in Austin, TX.
(lwdimick.com)