Warning: Use of undefined constant pinkpen - assumed 'pinkpen' (this will throw an Error in a future version of PHP) in /usr/home/womenarts/public_html/wa/wp-content/themes/child_wa/pinkpen.php on line 21
 Simon and the Oaks - WomenArts

Summary: A young boy named “Simon” (Jonatan S. Wächter) makes a fateful choice on his first day in a new school, and his actions that day change the course of his life.

Set in Sweden between 1939 and 1949 (the decade which surrounds World War II), Simon and the Oaks is a sweeping historical epic filled with rich character detail and deeply inhabited performances. Although the main character is clearly Simon (played by Jonatan S. Wächter as a child and by Bill Skarsgård as a young man), Simon’s mother “Karin” (Helen Sjöholm) is the film’s anchor, and several talented actresses also play small but significant supporting roles.

Lisa Ohlin’s new film Simon and the Oaks is about the choices we sometimes make when we are young, choices that we make without realizing they are choices, choices that turn out to determine the future.

In this case the fateful choice is made by a boy named “Simon” (Jonatan S. Wächter) on his very first day at a new school. Simon is the bookish son of a robust and physically powerfully man named “Erik” (Stefan Gödicke) who worries that others might call his son a wimp. So he forces boxing lessons on a reluctant boy who flees as soon as he can. But once at school, Simon sees students bullying another boy and bam! A boy who could never defend himself finds the inner strength to fight for another.

The story opens in the summer of 1939 when what will become World War II is already on the horizon, soon to become a daily nightmare. Isak’s father “Ruben” (Jan Josef Liefers) had fled Berlin early, taking sufficent resources to set himself up in Gothenburg, Sweden (where the bulk of the story takes place). Isak and his mother came later, already scared by their traumatic experiences under Nazi boots.

Forget that you know what will happen to most German Jews and what will not happen to most Swedish Jews. One of the strengths of Simon and the Oaks is its ability to capture the terror of the times for all those most impacted. Finally the war is over and a post-war economic boom begins in Sweden. But mutual interdependence during the war years has made them all so close that their fates are forever intertwined.

Now adults, Simon (Bill Skarsgård) and Isak (Karl Linnertorp) pursue their chosen professions and various girls enter the mix. And always holding everyone together is Simon’s mother “Karin” (Helen Sjöholm) a seemingly ordinary woman with a ferocious will. Despite Erik’s reservations, Karin has made places in her home and in her heart for both Isak and Ruben, and they can never be dislodged.

Simon and the Oaks is a sweeping historical epic filled with rich character detail and deeply inhabited performances. Although the person at the center is clearly Simon (first as a boy and then as a young man), all of the major characters have believable narrative arcs, and none are short-changed. Many talented women also play small but significant supporting roles, including Isak’s mother, Simon’s aunt, and Ruben’s niece (an Auschwitz survivor). Each actress makes a contribution that resonates.

Screenwriter Marnie Blok has distilled the essence of Marianne Fredriksson’s beloved source novel (very long and very dense) without turning anyone from three dimensions into two. With a budget of $7.5 million, Simon and the Oaks is one of the most expensive feature films ever produced in Sweden, and almost none of it has been wasted on explosions, chases or other tedious “special effects.” The cinematography is luminous with natural light and furtive shadows; the art direction, set direction, and costume design are precise and attentive.

Simon and the Oaks received 13 nominations recently for Guldbagge Awards from the Swedish Film Institute (aka the “Swedish Oscars”) including Best Picture and Best Director, and I’m sure it deserved every one of them.

Simon and the Oaks opens in Manhattan on October 12, 2012,
and spreads to art houses in other cities soon after. 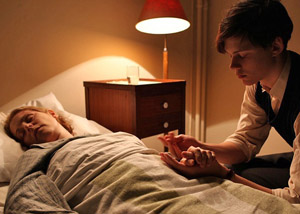