Warning: Use of undefined constant pinkpen - assumed 'pinkpen' (this will throw an Error in a future version of PHP) in /usr/home/womenarts/public_html/wa/wp-content/themes/child_wa/pinkpen.php on line 21
 Frozen River - WomenArts 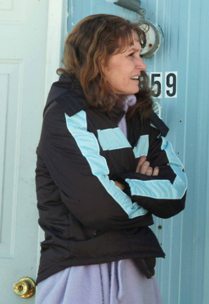 Midway through filmmaker Courtney Hunt’s powerful first feature Frozen River, two women make a fateful decision.  They barely know one another and each woman has a lifetime of good reasons for suspicion.  If they fail, the consequences will be enormous for all concerned, but success will do nothing to improve the material circumstances of either woman’s family.

The most remarkable thing about the way Hunt films this scene is that it’s totally visual.  “Ray Eddy” (Melissa Leo) and “Lila Littlewolf” (Misty Upham) both know what they have to do, they do it, and they move on.  When I try to imagine two men in similar circumstances, I can’t picture the scene without dialogue.  What they’re planning to do is totally crazy.  Surely one would try to bully the other into changing his mind?

But for as verbal as most women are most of the time (and we are!), sometimes a situation is so clear that no words are required.  Furthermore, once they’ve shared this experience, Ray and Lila find they’ve bonded, and their new relationship propels the film to an unexpected but well-earned conclusion.

Ray is married to an addict, and they have two sons.  One is a teenager and one is still a kid, and the age difference between her two boys dramatizes how long Ray has been struggling to keep her marriage going.  Her job is their only regular source of income, but the guy she works for is a sneering 20something who’s pushing her to quit.  Dealing with customers, cops, and others with power over her is physically painful; every time she forces herself to smile, her self-esteem takes another blow.  Whatever tenderness she still has is saved for her boys.  If she’s someplace they can’t see her, her haggard face reveals that bitterness and exhaustion have pushed her to the edge.

Lila lives alone on a Mohawk Reservation straddling the St. Lawrence River.  One part of the reservation is in New York and the other part is in Quebec.  Mounties patrol the Canadian side and state troopers patrol the American side, but as long as she’s on the reservation, Lila is under the jurisdiction of the Tribal Council.  Friends repeatedly warn her that smuggling is too risky, but Lila won’t stop, even though she already has a record as a juvenile offender.  She needs money and she doesn’t believe she has legitimate ways of earning any.

No one in Frozen River gets a detailed back story.  Almost everything is told in the present tense, and most of what Ray and Lila reveal about themselves comes through body language.  But when I spoke with Leo, she said Hunt was very precise and always knew just what she was after: “The script was extraordinarily complete.”  Asked what most interested her most about Ray, Leo said: “It’s easy to do things you know are right, but more interesting to see someone do something against her better judgment.”

Frozen River is a perfect film.  Every character is carefully drawn and totally believable, and I was immediately engrossed in the story line.  The ending took me completely by surprise, all the more so because I’d seen the trailer multiple times and thought the plot would be more conventional.  Hunt clearly delights in teasing us, luring us into the theatre with chase scenes and gun play so that she can tell us a finely-crafted story about two women otherwise invisible in today’s multiplex.

If I ruled the world, then Melissa Leo would have received Best Supporting Actress nominations in 2004 (playing “Marianne” in 21 Grams) and in 2006 (playing “Rachel” in The Three Burials of Melquiades Estrada).  If she’s not nominated for Best Actress this year (for “Ray”), I’ll be howling in protest!

“Women form alliances throughout time in odd and various ways.  I’m thinking of people like Queen Elizabeth and her Ladies-in-Waiting.  Who was really running that country? Was it Elizabeth and the men in the Council, or was it the ladies dressing Elizabeth that were really in charge?”

“I think that both of these women in Frozen River are women who know how to make do, and they’re not counting on anybody to be there for them.  They make a very shaky arrangement, completely distrustful of one another, but like in life, I think that simply the doing of this rather dangerous task forms a bond; in spite of themselves a bond forms, perhaps a bond more trustworthy than any bond either of them has ever known.”

“With Homicide: Life on the Streets [the TV series in which Leo starred as “Detective Kay Howard” from 1993 to1997], I began by going through hair and makeup and doing the works, but eventually I saw an opportunity to be a woman on national television without makeup.  Since I started working, some guys like to wear their makeup, but most of them don’t.  Why is my face so different than their faces?  Why does ‘the girl’ have to be pretty every time?”

“I’m the actor who’s willing to not be “pretty;” pretty, schmitty, it’s never played a very big role in my life.  I think there are things about me that are very beautiful.  I think that I’m a very beautiful person in many ways.  But I’ve never been a ringer; I’ve never been a prom queen, not even close.  So I don’t get those roles that the prom queens or might’ve been prom queens get.  I have no regrets about that.  I hope I continue being able to do all of it, from soup to nuts, A to Z.  That’s what interests me.”

“When Courtney was trying to raise money for Frozen River, I would call her every three or four months and say: ‘We makin’ that movie?’  I come to find out three years later that I would often call, just like woman do, at that very moment when she was ready to give up, get a kindergarten teaching license, and forget about it.  Certainly I have been given reasons to give up, but I won’t.”