Warning: Use of undefined constant pinkpen - assumed 'pinkpen' (this will throw an Error in a future version of PHP) in /usr/home/womenarts/public_html/wa/wp-content/themes/child_wa/pinkpen.php on line 21
 Brick Lane - WomenArts 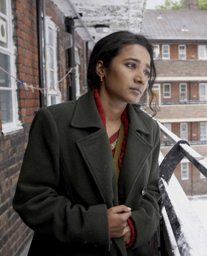 Summary: A haunting evocation of immigrant life, tenderly delineating the slow steps by which a Bangladeshi woman (Tannishtha Chatterjee) makes a home for her daughters in London so different in every way from the one she herself knew as a girl. The Hot Pink Pen applauds the filmmakers’ intentions, but one huge casting decision undermines their efforts.

Brick Lane is a beautiful film that could have been even better.  Based on a well-regarded novel of the same name by Monica Ali, Sarah Gavron’s film is about a young Bangladeshi woman named “Nazneen,” who’s sent to London as a teenager to marry a man she’s never met.

After a brief prologue filled with idyllic childhood scenes of Nazneen and her younger sister Hasina romping through lush greenery, the story picks up again almost twenty years later.  Nazneen (played as an adult by Tannishtha Chatterjee) and her husband “Chanu” (Satish Kaushik) are now a long-married couple raising two daughters: “Shahana” and “Bibi.”  Bibi (Lana Rahman) is still young, sweet, and compliant, but Shahana (Naeema Begum) is a teenager with raging hormones and a sharp tongue.

Brick Lane is a real place, and it’s been the center of the British garment district ever since Huguenot refugees brought their looms from France in the early 18th century, followed by waves of poor Irishmen and Ashkenazi Jews.  When Chanu leaves his position on the District Council, a friend helps Nazneen connect to the neighborhood’s thriving underground economy, and her new job as a home-based pieceworker brings her into regular contact with “Karim,” (Christopher Simpson) the young man who brings her materials and takes her finished goods back to the factory.

The film holds fast to Nazneen’s point-of-view, rewarding the viewer with a deep and multifaceted depiction of the inner life of an immigrant woman. Nazneen lives quietly day-by-day, never fully aware of the fact that her loyalties are gradually shifting in tiny increments from the past (as embodied by her spouse) to the future (represented by her children).  Although the filmmakers always respect their source material and do their best to portray the real Brick Lane neighborhood, the core of this story is universal.

Chatterjee is a soulful actress, and Nazneen is a wholly satisfying stand-in for every woman who’s ever left everything familiar behind in order to build a new home in a distant place.  Regardless of how she arrived, whether voluntarily, under duress, or in flight, once the immigrant woman is in the new place, her home becomes her domain.  The outside world, news of which generally comes to her second-hand, has less reality than preparing food, laundering clothes, and doing all the mundane things required to nurture those who depend on her.

Gavron gets strong performances from all of her actors, and she does a brilliant job of using lights and shadows to define the interior spaces.  But she threw her film visually off balance by casting Satish Kaushik as Chanu.  I hate myself for saying this, but I think it has to be said: Kaushik is simply too physically unattractive to hold up his end of the narrative.  The truth is that Chanu is a great guy.  Even though he stomps around their tiny apartment threatening physical violence, he’s actually proud of the fact that he’s helped to create a modern daughter who’s free to speak her mind.  Unlike Nazneen, Chanu is a “true believer,” devoted to English literature and higher education.

Inevitably Shahana–blunt, cruel, and totally self-absorbed–forces Chanu to face his predicament: to their British neighbors, Chanu is just another “Paki;” an immigrant with dark skin and a heavy accent; an ardent colonial with an inflated view of his own prospects.  But as Nazneen learns through her relationship with Karim that even if Chanu had been handsome in youth, discrimination would have worn him down, growing ever more burdensome as he aged.

Adapting the novel for the screen, the filmmakers understood that they had to make their heroine prettier than Ali created her, but they didn’t seem to anticipate how much more obese and ugly Kaushik would look standing next to someone with Chatterjee’s delicate beauty.  This is a tragic error.  Casting Kaushik as Chanu makes it easy for audiences to dismiss his well-earned grievances, and it robs the film of a hero whose worldly travails are the mirror image of this heroine’s domestic triumph.

“My grandmother was born in Berlin.  At age 17, she was sent to England by her parents.  She was a dancer and gymnast, and she was going to be in the 1936 Olympics, but she was told: ‘Certainly you can’t, because you’re a Jew,’ and at that moment when her parents realized: ‘We’ve got to get her out.’ So she was 17, and she got sent to England on her own.

It was really unfortunate for her, because if she’d been more in the [Kindertransport] loop, she would’ve come to London and gotten involved in the Jewish community and had a home, but actually they went out of the system.  Her parents knew someone, and they sent her off, so she was sort of a misfit in every department, because she was German and she was Jewish and both things weren’t good.

That was 1937, I think.  Her parents were both literature professors in Berlin and they had some students who weren’t Jewish, who loved them and hid them. Her mother died during the war.  Her father came to England eventually, as a sort of broken man, really, who never quite recovered from the whole experience.

So my grandmother came from this wonderful upbringing: cultured, educated.  She tried to fit in; she became very working class; she changed her name to ‘Jennifer Coates’ (which is very English); she got an impeccable English accent.  She was someone who spent her whole life hiding, not revealing her identity.  When I became a filmmaker, I endlessly interviewed my grandmother, and I made a little short about her at film school, just after she died, so she never saw it.  She would’ve been horrified!

My grandmother died when I was 26, so I really knew her, and I really loved her.  I knew she was Jewish, the family knew, but she wasn’t revealing it to the people around her.  I mean, friends hadn’t known she was Jewish until we made speeches at her funeral!  So my mother, consequently, became someone who felt it was very important to speak out, and my mother became a local politician and then the Deputy Mayor of London!

Brick Lane was daunting for me and frightening in lots of ways, because it was a first film, and it was a big novel that was well loved.  When you make a decision as a director, you know that it’s a huge commitment.  It’s three years of your life, and you have to stand by it, and it takes every iota of your being to make a film.

But there is no doubt that my grandmother was one of the forces that drew me to Brick Lane: seeing the world as an outsider through her eyes and then watching my mother (who’s the Shahana in our family story).  Nazneen is my grandmother: from the generation displaced.  My grandmother came to England at the same age as Nazneen: 17.

Strangely enough my brother had written a book about Brick Lane called An Acre of Barren Ground, a fictionalized story told from different perspectives.  So I knew the area through that too, and I knew that various Jewish people had their roots in Brick Lane.  So there were emotional connections, although not direct by any means.”

Yes, that was the connection when I went to Brick Lane.  The life that I have lived is very different from the experience that Nazneen was supposed to go through, but culturally there were many things when I went to meet women in and around Brick Lane who had similar stories.  Like Nazneen, they got married at a very young agei in arranged-marriage situations: transported into an alien culture; didn’t speak the language; didn’t know anyone; didn’t know how to communicate…

So when I was talking to these women, they impressed me because they found a connection.  I felt very nostalgic and in fact that particular fish that my grandmom always talked about: I never had that in India, but I had it in London!

In the beginning of the film, Nazneen is the one who wants to go back home to Bangladesh.  She has all these images from her childhood, and she feels so claustrophobic.  The only outlet she has is through her letters to her sister who lives in Bangladesh, and she’s always trying to go back home.  But through the film and through her story, we realize that she finds home.  She says: ‘I didn’t know that I was searching for a place which I’ve already found.’

Her daughters are so comfortable in London, and they don’t want to go back ‘home’ to Bangladesh.  London is ‘home’ for them, and that’s what Nazneen realizes: ‘I was 17 when I came here and now I’m 34, so I’ve lived half/half, where is home for me?  This is home, and this is where my daughters want to be.  This is where I found my independence and my voice in my own ways, in the things also that I brought from Bangladesh.  I wear my sari.  I have not started wearing trousers or cut my hair short.  In my very own way, I have found a voice and I am comfortable with that here.’ It’s a mother/daughter story.”

Monica Ali’s novel Brick Lane runs 415 pages, a substantial percentage of which contains letters from Hasina (Nazneen’s sister in Bangladesh).  Since Ali always punctuates Nazneen’s story with updates from Hasina, the reader understands that Nazneen is actually “the lucky one” long before Nazneen is able to appreciate this fact for herself.  In deference to those who have yet to read Ali’s wonderful novel, I won’t say any more here about the tragic dimensions of Hasina’s life.

The novel also contains chapters about Nazneen’s childhood in Bangladesh as well as her early years in London (including the death of her first child and the chronicle of Chanu’s career disappointments).  Important characters like Dr. Azad and Razia also get their own narrative arcs.

Bottom line: Novel and film are completely complementary, and if I ruled the world, Gavron would make a sequel in which Hasina’s POV was punctuated by letters from Nazneen.