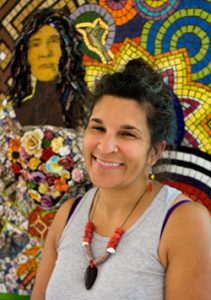 “I want visual art to be as accessible as music,” says public artist Lori Greene.  “Music catches people right away. It is coming out of cars, stores. It’s everywhere. People crave music.”

The Power of Public Art

Lori Greene is a mosaic artist based in Minnesota whose murals and sculptures can be seen at restaurants, airports, churches, hospitals and schools from Minneapolis to Dubai. Greene’s family heritage is a meld of African and Native-American, and her artworks draw from the cross-cultural textile traditions of telling stories and passing hidden messages. Images of power and strength abound in her work.

Greene is also realist. She knows that many of the kids from her working-class neighborhood that has been dubbed “Little Africa” will never set foot inside an art museum. She knows that art is detached from so many Americans’ daily lives. “It is intimidating to go into an art museum. People don’t feel invited. They over-analyze, believing that they don’t understand even when they do,” Greene says.

Greene’s response is to integrate art into the everyday streetscape. “I want to put art everywhere,” she says. Her focus is to create opportunities for communities to reflect their own faces and untold stories right in their own neighborhoods, where they can see it every day. For Greene, public art is an opportunity for people gain power over their own stories.  She also encourages that power as the owner of Mosaic on A Stick, a mosaic supply shop that offers classes and serves as a community studio. 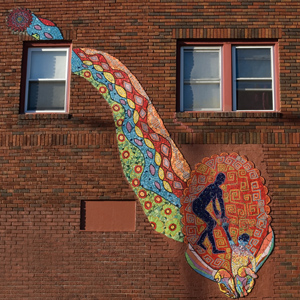 In starting a new project, sometimes Greene has to go in easy. Seeing more boys growing up disconnected from the community, Greene armed herself with a grant and art slides when she invited a group of incarcerated teens to help her create a new public mural.

“None of them felt comfortable,” Greene recalls. “They were swearing and wouldn’t look at me.” Greene saw their stress as she presented her slides and told the artworks’ stories. Greene was surprised how quickly the boys let their guard down.

But they were terrified of drawing. “So much anxiety. Similar to when you ask people to do a math problem,” Greene recalls. “Immediately, it was ‘I’m not good at that.’” Instead, Greene asked the boys to tell her what they wanted to see, and she sketched. The boys named the mural Lift as We Climb and helped install it on the side of a mixed use building at the corner of Snelling and LaFond Avenues in St. Paul. 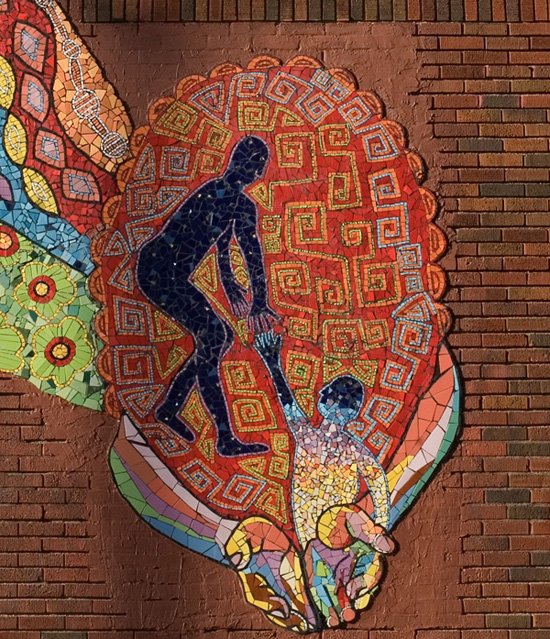 Greene plans for a similar project to help start a much-needed conversation between black youth and the St. Paul Police Department. “It would be interesting for the police to work with the kids as people, not as cops,” says Greene.

Across the Mississippi River in a Minneapolis neighborhood known for its strong Latino and Northeast African businesses, lies the Midtown Global Market, an economic revitalization project that promotes the neighborhood’s cultural diversity by offering up the international food, groceries and music that residents want to eat and hear. It’s a place where craft beer meets Kufta kebabs with wafts of Tibetan incense and free parking validation. 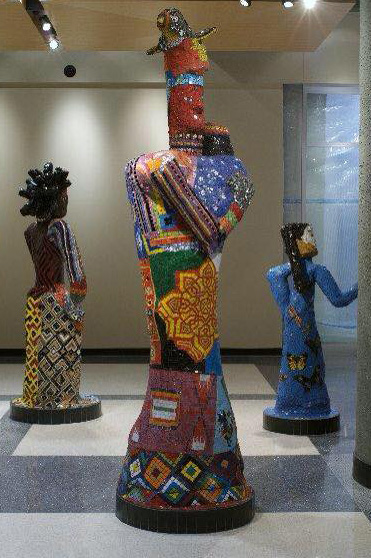 At the market’s entrance stands Greene’s Divination System, a family of mosaic sculptures made of concrete and overlaid with waves of colorful tiles formed into globally-inspired patterns. The statues beg to be touched as they sparkle under LED lights and reach out a hand in welcome.

As a gift to the community, Greene ensured that all would be included. Imagining the cleaning crew high up on ladders wiping down the towering figures, Greene hid tiny secrets on the top of their heads. Greene also embedded pieces of her deceased father’s wristwatch into the father figure’s dreadlocks. Like so many others, her father had worked in the market’s building back in the 1960s when it was the retail powerhouse of Sears and Roebuck, and Midtown felt like the center of the Universe.

However, to Greene, the artistic layers are secondary. “I don’t care what they know about it, just that they like it,” says Greene. Rather than reflect on her work, Greene turns her eye to the public, especially the kids. “When I’m creating these pieces, I think about the people at every moment. How are they going to see this? How are they going to feel? I want people to touch the art. It is theirs.” 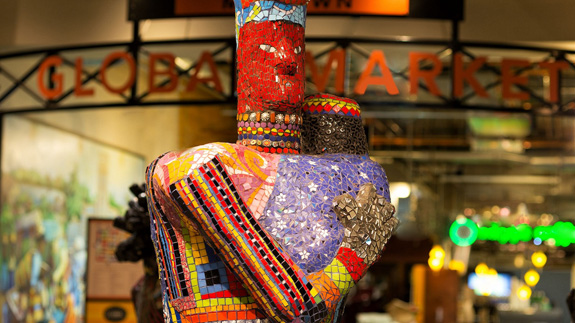 Next on Greene’s project list is a memorial to women who survived rape. A seating area in a park, it too will reflect back the faces and stories of survivors. Sexual assault victims often experience post-traumatic stress similar to those returning from war, yet this memorial will be the first of its kind in the United States.

The project came to Greene via a phone call. Two years ago, Sarah Super who was raped by her former boyfriend at knife point reached out to Greene. “She read my story about being kidnapped at 16 and raped,” says Greene. “When I picked up the phone I thought, ‘Of course, I’m getting this right now.’” It was time for Greene to take power of her own story, as a survivor, a mother and an artist.

From parks and exterior building walls to garbage cans and bathroom entrances, Greene sees a world of blank canvases. “When art is all around and people see themselves reflected back, that is when people think about art.” Or maybe more to her point, people will live art. Like music.

Lifting as We Climb (http://nacwc.org/aboutus/index.html) – “Lifting As We Climb” is the motto of the National Association of Colored Women’s Clubs, a powerful coalition of African-American women’s organizations that was founded in 1896 in Washington, DC. 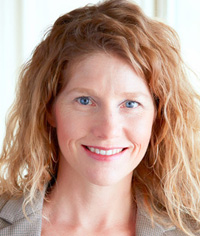 Jenn Hyvonen is a creative, editorial and brand writer who strives to have it all: work, family and a sense of self. Based in Minneapolis, Jenn used 20 years of marketing and communications experience to build powerful stories that ignite action. Find more stories at Hyvo Creates  and follow her blog WriteOn!