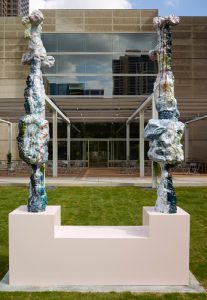 This is a milestone for women in the male-dominated world of sculpture.  Warren’s piece is one of the first commissioned works by a living female artist to be permanently installed at the entrance of an American museum, and it is especially significant because the Dallas Museum of Art is one of the ten largest art museums in the country.  This is also the first outdoor sculpture commission from a U.S. museum for Warren, who has won many awards in England. The acquisition was made possible by a grant from the Kaleta A. Doolin Foundation.

Pas de Deux (Plaza Monument) consists of two biomorphic forms, each more than 14 feet tall, cast in bronze and hand painted by the artist.  Warren is known for challenging Western sculptural traditions through her distinctive female nudes. She uses an earthy, unfinished look, and her figures often have exaggerated physical characteristics, such as very large breasts or buttocks.  Warren’s figures challenge our ideas about what sculptures should be or look like, and they provide a wry commentary on the ways that so many male artists have distorted women’s bodies. 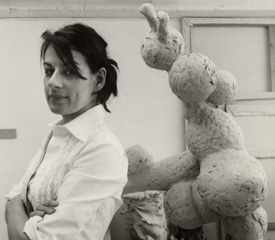 The Dallas Museum of Art is also presenting a companion exhibition, Rebecca Warren: The Main Feeling, which will focus on Warren’s sculptures from 2003 to the present day.  The exhibition will feature 20 works from this transitional phase in the artist’s practice where she adopted an increasingly abstract style. It will include some of her early neon-lit wall vitrines, as well as works in welded steel, clay and bronze. It will run through July 17, 2016.  Visit the museum’s webpage about the exhibit for more images of Rebecca Warren’s work. 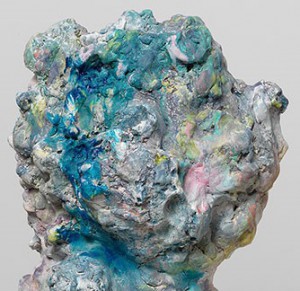 Warren was nominated for the Turner Prize in 2006 and the Vincent Award in 2008. The Kunsthalle Zürich mounted a one-person exhibition of Warren’s work in 2004; the Serpentine Gallery, London, presented a survey of her work in 2009; and the Kunstverein Munich presented The Living, a solo show, in 2013.

In 2014, Warren was inducted into Britain’s Royal Academy of Arts. Warren has also served as Professor of Arts at the Kunstakademie Düsseldorf since 2014. She lives and works in London.